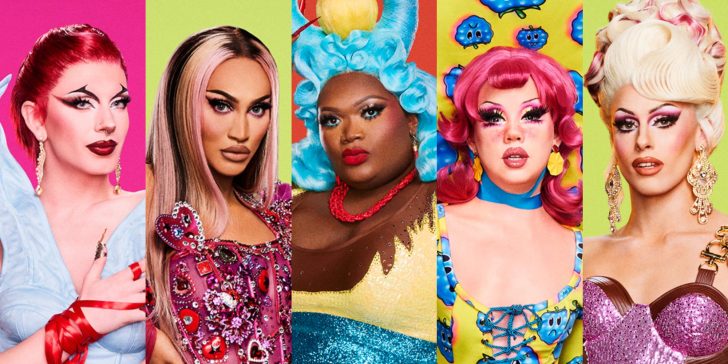 RuPaul’s Drag Race season 14 is currently featuring five transgender contestants on the show. Check out which season 14 queens have come out as trans.

A record-breaking number of transgender contestants are competing on RuPaul’s Drag Race season 14, which is bringing even more diversity to this Emmy-winning LGBTQIA+ competition series. For many years, there’s been some criticism about the lack of more trans contestants on Drag Race. The show had already featured noteworthy trans contestants such as Sonique, Monica Beverly Hillz, and Peppermint, but 2021 turned out to be a landmark year for trans representation in the franchise.

On one hand, Gottmik made history on RuPaul’s Drag Race season 13 by not only being the first trans man to compete on the show but also by being a fierce competitor who got to the grand finale with real chances to take the crown. Meanwhile, season 2 star Kylie Sonique Love reintroduced herself to new audiences on RuPaul’s Drag Race All Stars 6 and went on to win the season. As a result, Kylie became the first-ever trans queen to enter the Hall of Fame of Drag Race.

Now, Drag Race season 14 is featuring as many as five transgender contestants in the competition. The season started out with two openly trans queens: Kornbread “The Snack” Jeté and Kerri Colby. Despite establishing herself as the frontrunner of the season, Kornbread had an unfortunate injury that took her out of the competition. As the season went by, many other queens started to open up about their trans identities. Bosco shared on social media that she started to transition right after filming Drag Race. Jasmine Kennedie then revealed during an Untucked episode that Kerri inspired her to go through with her transitioning process. Last but not least, Willow Pill has now disclosed that she also identifies as trans.

As a heartwarming joke, Kerri shared the tweet above where she is seen putting together trans queens just like Thanos pursued Infinity Stones in the Marvel Cinematic Universe. There is absolutely no denying that Kerri and Kornbread being their best selves on Drag Race played a huge role in how the other queens perceived themselves out of drag. It is clearer than ever to fans and drag performers alike that there’s a huge difference between someone’s drag character and gender identity. It is possible for both of those things to coexist. In fact, drag queens and trans performers have coexisted for decades in ballrooms, pageants, and other queer spaces outside of television.

After so many years of fans wanting more trans representation on the show, it seems like season 14 has finally turned a new leaf on that narrative. Not only have trans contestants been cast on RuPaul’s Drag Race, but they are doing great in the competition and being very celebrated by the judges and the fans. This has been a long time coming, but it feels great that this Emmy-winning series has finally gotten to this point.