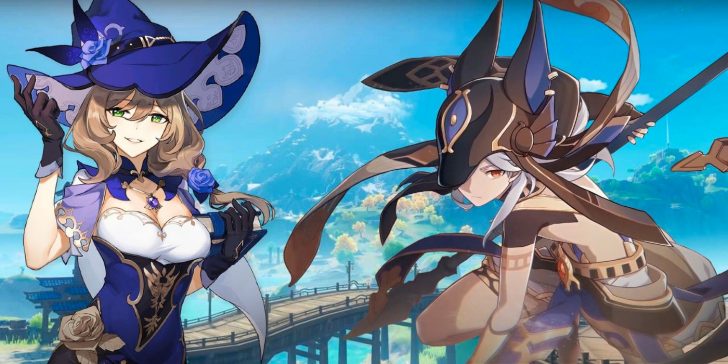 Sumeru is the next region coming to Genshin Impact in the near future, and several characters already in the game are from this new country already.

Of the playable characters in the game already, Lisa is the sole Genshin Impact character with the most direct ties to Sumeru. The Librarian for the Knights of Favonius studied at the Sumeru Academia before returning to Mondstadt prior to the events of the game. Because no playable characters in Genshin Impact are currently from Sumeru, Lisa has arguably provided the most hints at what players can expect in the new region’s culture – that there’s an emphasis on wisdom and academics are a major priority.

Meanwhile, the Genshin Impact character Cyno was shown previously in an early preview of Sumeru before the game was fully released. He’s also been seen in the manga, which can be found on the game’s official site for free, and is a scholar at the Sumeru Academia. Character designs in Genshin Impact have been known to change, but since Cyno has appeared in both a video and manga so far, it’s likely his Egyptian-like garb will remain the same – and indicates the real-world country Sumeru is based on. However, there are still various NPCs already in Genshin Impact who are from Sumeru.

Genshin Impact NPCs Who Are From Sumeru

Even beyond Lisa and Cyno, a bit can be learned about Sumeru already by talking with various NPCs in Genshin Impact, including:

Currently, the next update for Genshin Impact will be Version 2.6. Version 1.7 was the last update before Inazuma and 2.0 arrived, which means the new Sumeru region and Genshin Impact 3.0 should be expected soon. Although there are currently no playable characters originally from Sumeru, characters like Lisa and Cyno shed more light on the country – as do the various NPCs scattered around Liyue, Mondstadt, and Inazuma. Most likely, characters from Sumeru like Cyno won’t be playable in Genshin Impact until the 3.0 update arrives.

Austin King is a Game Features Editor at Screen Rant. He’s the author of several books and hosts the Dragon Quest FM and JRPGs & Me podcasts. You can find him on Twitter @DragonQuaustin.