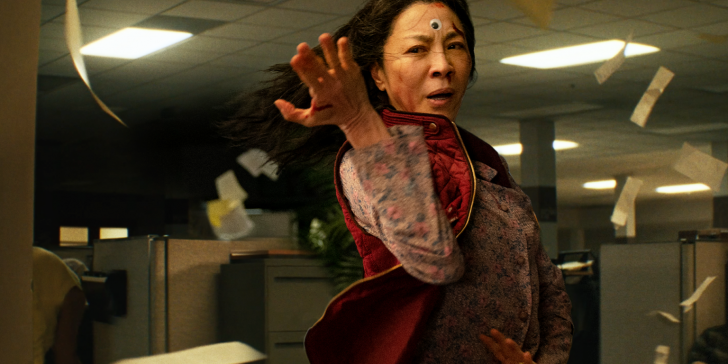 In 2016, after completing their debut feature Swiss Army Man, filmmakers Dan Kwan and Daniel Scheinert (collectively known as “Daniels”) began composing their ambitious follow-up, an outlandish action comedy in which an ordinary person travels the multiverse and explores the unfulfilled potential of their life. Six years later, the multiverse is everywhere, as corporate entities have begun exploiting the idea for maximum fanservice. To Marvel, Sony, and Warner Bros., the multiverse is a toy, a convenient tool that lets them mash together various Spider-Men and dress up Wile E. Coyote as Nux from Fury Road. They’ve demonstrated little interest in exploring it for what it actually is — a theory that if ever proven would change absolutely everything about our lives and how we live them, potentially draining all sense of meaning out of an already pitiful existence. It’s heavy stuff. It’s also potentially hilarious, taken to a far enough extreme.

With their long-awaited second feature, Daniels dive into the well-trod concept of the multiverse and leaves nothing on the table, using it to explore nihilism, absurdity, and the profound beauty of human connection in a film that also contains a martial arts action sequence in which one of the combatants is wearing a butt plug. Everything Everywhere All at Once is a splendid blend of zany action, deep thought, high art, and lowbrow humor that engaged every feeling in my body and left me desperate to see it again.

When Evelyn Wang (Michelle Yeoh) was a young woman, she ran off to America with her first love, Waymond (Ke Huy Quan). Decades later, they live above their laundromat which, like their marriage, is on the brink of collapse. Evelyn is barely aware that she has alienated herself from her family. So far as she’s concerned, her kind and emotional husband is just weak-willed, and her lesbian daughter Joy (Stephanie Hsu) is just confused. Right now, she’s focused on settling her estranged father (James Hong) into her home, arranging a Lunar New Year party in the laundromat, and preparing to be audited by IRS agent Deirdre (Jamie Lee Curtis). Organizing her receipts means taking stock of her life, seeing how little she’s accomplished and resenting the decisions that made her such an insignificant person. As it happens, it’s that very insignificance that makes her the key to saving infinite universes from destruction.

Evelyn is approached by an alternate version of Waymond from the Alphaverse, the first branch of the multiverse to make contact with another. Alpha-Waymond teaches Evelyn how to “verse-jump,” to bridge the gap between herself and other Evelyns, peek into their lives, and share their skills and memories. She’ll need to become the ultimate version of herself in order to survive the coming battle with Jobu Topaky, her nihilistic, reality-bending nemesis from another dimension. Evelyn travels to realms both familiar and bizarre, exploring the many roads not taken in her life and finding it more difficult to deny that, if there’s an infinite multiverse, then nothing she or anyone else does has any real significance. At the same time, seeing everything she could have had forces her to reevaluate what she does have that’s worth saving. It’s an emotional and existential journey, with kung fu and dick jokes.

Everything Everywhere All at Once is a film that works every muscle group. It’s an off-the-wall comedy with a crude sense of humor that comes to the forefront even at the most unexpected moments. It’s a deeply heartfelt family drama that brought me to tears on three separate occasions. It’s a sci-fi movie that explores its high concept in a way that satisfies both the desire for abstract ideas and specific minutiae to geek out about, and it’s a fantasy in that “who actually gives a shit how this works” kind of way. It’s an action-adventure with some truly gorgeous fight choreography, it’s a romance about finding the love of your life for a second time. It’s a cartoon, it’s an art film, it’s an immigrant story, it’s a mother-daughter story, it’s queer cinema. Its title is apt, to say the least.

During the Q&A after a preview screening, co-director Dan Kwan explained that many of the film’s themes were born out of therapy, and an exploration of Internet-derived nihilism. Growing up online has made millennials keenly aware of how massive the world is and how small we are in it, and Kwan and co-director Daniel Scheinert feel that this is the key philosophical divide between their generation and their parents. Using the multiverse as a dramatic placeholder for the infinite internet, Daniels aimed to bring a character and an audience all the way through the bleak despair of total nihilism and out the other side into the warm embrace of nihilist humanism. They achieve this profundity in a film that is also absurdly silly, all the while managing to avoid harsh tonal whiplash. The more stupid the jokes, says Scheinert, the more sentiment they could pack into the story.

Nearly four decades after her first credits in Hong Kong, Michelle Yeoh is finally the star of her own Hollywood feature film, and she shines brilliantly. Yeoh is irreplaceable as Evelyn Wang, a role that utilizes the full range of her talents for dramatic acting, comedic timing, martial arts, and the intersection of all three. When we meet Evelyn, she elicits both sympathy and scorn. She’s relatable for her regret and exhaustion but contemptible for her thoughtless cruelty towards the people who love her most. Yeoh carries us through Evelyn’s long, complicated emotional transformation while also showing us glimpses of other, subtly different Evelyns from other realities. This alone would be demanding enough, but Evelyn also has multiple complex, gag-dense fight scenes. Daniels initially imagined Jackie Chan as the star of the film and his “accidental fighting genius” persona is still in its DNA, reinterpreted by his “SuperCop” co-star to dazzling effect. (With the Oscars a week away, I can’t help but get mad in advance over this being exactly the kind of great performance that the Academy tends to ignore. Perhaps the “It’s about time!” factor will be enough to score her a nomination next year.)

Everything Everywhere All at Once sees the return of Ke Huy Quan (Data of The Goonies, Short Round from The Temple of Doom) after 20 years away from acting. (He’s also in last year’s Netflix film Finding ‘Ohana, but EEAaO was shot first.) Quan is a treasure as Waymond, Evelyn’s kind-hearted husband who feels as if he’s become invisible to her. That Quan is most remembered as a child star works in the film’s favor, as Waymond feels like an old childhood friend who’s just as sweet as you remember him. Waymond’s boyish kindness is mined for humor, but it’s also highly valued by the storytellers. At the Q&A, Daniel Sheinert half-joked that Waymond became a celebration of the beta male. Like Yeoh, Quan gets to show off his range by playing a few different Waymonds from across the multiverse, each a distinct character, each deeply in love with their world’s Evelyn. It’s also a fight-heavy role (even after Daniels decided to make Evelyn the lead, they still wrote Waymond with Jackie Chan in mind), and Quan looks fantastic taking on a group of security guards armed with nothing but a heavy fanny pack.

Waymond gives Everything Everywhere its kind heart, but the real center of the film is Evelyn’s relationship with her daughter, Joy, portrayed by Stephanie Hsu (The Marvelous Mrs. Maisel). Hsu gets plenty of screen time and does a lot of heavy lifting here, carrying Joy’s years of quiet suffering as the child of an overbearing parent who has never really tried to understand her. The fate of all of existence may hang on Evelyn accepting Joy for who she is and making her feel supported rather than merely tolerated. Every actor in the film wears a lot of hats and Hsu is no exception (she also wears the most literal hats), and as someone who was not familiar with her work, hers was the performance that impressed me the most. Jamie Lee Curtis and James Hong (who turned 93 this year!) are reliably excellent in their comedic roles, but also provide powerful empathetic moments.

The action and comedy of Everything Everywhere All at Once is staged and cut to squeeze the maximum amount of joy from every shot. There’s a cartoon brilliance to its fight scenes that’s rare in live-action Hollywood movies, which tend to create comedy by having characters make wisecracks during action that isn’t funny on its own. Everything Everywhere is silent movie funny — just as Jackie Chan mashed together the sensibilities of Buster Keaton with Bruce Lee, Daniels combine Jackie’s with a millennials’ crude, I Think You Should Leave surrealism. The rules of the world are designed to create opportunities for absurd gags, and they deliver big time. Despite the current cultural ubiquity of the multiverse, only Rick & Morty has wrung this much absurdity out of the concept, but Everything Everywhere is decidedly less cruel.

The multiverse also allows Daniels, cinematographer Larkin Seiple, and production designer Jason Kisvarday to play around with different visual sensibilities, color palettes, and film qualities. A more romantic universe mimics Wong Kar-Wai’s neon lighting and step-printing. An alternate Evelyn studies kung fu in a montage styled after ’70s Shaw Brothers action movies. Their imagination is not limited to homage — some of the divergent worlds are too bizarre to describe or too fun to spoil. A24 may not be working with Marvel money, but the visual effects are carefully employed and look fantastic. When villainous Jobu Tapaky seamlessly shapeshifts between different incarnations across the multiverse, it looks as cool as anything you’d see in a big budget blockbuster.

As a critic, it’s my job to pick apart media and look for missing parts, slipped gears, and extra pieces. I’m sure that on repeat viewings I’ll find something I don’t entirely love about Everything Everywhere All at Once, but today, I got nothing. Daniels have set their sights high and delivered an instant classic and an early favorite for the best movie of 2022.