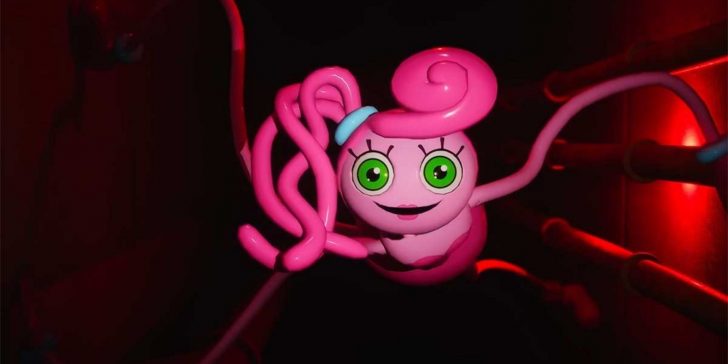 Despite being extremely short, taking an estimated 30-45 minutes to beat, Poppy Playtime has been incredibly popular since its launch, especially with fans of the survival horror genre. Due to the first chapter taking less than an hour to complete, players have been eagerly awaiting Five Nights At Freddy’s competitor Poppy Playtime’s second chapter. While the Poppy Playtime: Chapter 2 trailer doesn’t include a release date for the next installment, it’s expected to arrive at some point during March 2022. However, the trailer does include the new chapter’s official name, Fly in a Web, eluding to Mommy Long Legs’ spider-like design.

The end of the Poppy Playtime: Chapter 2 trailer provides a first glimpse at Mommy Long Legs, presumably Chapter 2’s main antagonist. The trailer opens with a pink hand, now known to belong to Mommy Long Legs, snatching Chapter 1’s antagonist, Huggy Wuggy, pulling him off-screen. Mommy Long Legs narrates the eerie trailer, which previews a new green hand instead of Poppy Playtime’s red GrabPack hand and gives a preview of gameplay for the upcoming chapter. Mommy Long Legs creepily describes the player as “a new playmate” hinting at her nefarious intentions for the game’s protagonist, suggesting the player is the fly she intends to entangle in her web.

Due to her side ponytail and long spaghetti-like strands, Mommy Long Legs’ design appears to draw inspiration from the iconic 1990s children’s doll, Betty Spaghetty. Even the two characters’ painted-on facial features are similar, with lipstick adorned lips, no nose, and three long black eyelashes. It’s worth noting that Betty Spaghetty’s limbs, clothing, and accessories were changeable, which begs the question of whether Mommy Long Legs will also share this quality. However, unlike Betty Spaghetty, Mommy Long Legs moves on all fours in a spider-like way, rather than walking upright. This ties in with her namesake, the daddy-long-legs spider, and the chapter’s title, Fly in a Web.

While little is known about Mommy Long Legs outside of the official Poppy Playtime: Chapter 2 trailer, her similarity in appearance to both Betty Spaghetty and a daddy-long-legs spider provide clues of what’s to come, and the trailer itself drops plenty of hints. It appears that Mommy Long Legs’ limbs will be bendy and extendable, and extremely far-reaching, adding to the challenge of the player evading her grasp. Poppy Playtime is renowned for its lore, and Mommy Long Legs looks to be another scary addition to the series.

Next: Why Poppy Playtime’s Unused Portraits May Have Been Removed

Suki Newell is a game features writer for Screen Rant and live streamer on Twitch. She resides in Upstate New York with her husband and two rescue dogs.