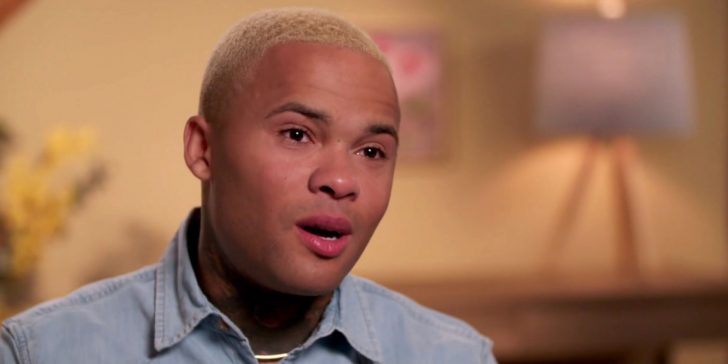 Fans of 90 Day Fiancé aren’t sold on series newcomer Jibri Bell’s latest money-making attempt at selling the pair of pants he ripped on the show.

New star of 90 Day Fiancé Jibri Bell has viewers side-eyeing his latest business venture. Fans first met Jibri on the 90 Day Fiancé season 9 premiere alongside his Serbian love Miona, who came to be with Jibri in South Dakota on a K-1 visa. After her arrival, high-maintenance Miona took issue with Jibri’s not-so-glamorous lifestyle living with his parents. However, Jibri assures his girlfriend he’s adamant about forging his own success, and his latest move made it clear he’s keen on planning his come up.

According to Jibri, his main career goal is his music. Jibri is the frontman in his band, Black Serbs. And while the music group ran into some trouble during the COVID-19 pandemic, Jibri is not only excited about his future with Miona, but also his future with the band as an aspiring musician. The new reality star certainly looks the part of a rockstar, as many fans have taken note of Jibri’s unique fashion sense. Jibri’s swag went a little too far when he accidentally split his pants when he hilariously dressed to impress Miona when he picked her up from the airport. Now, Jibri is attempting to make sure he makes a profit from the funny moment, but fans aren’t totally sold on his latest money-making move.

Jibri announced on Instagram that he was auctioning off his ripped pants seen in his now-famous 90 Day Fiancé scene getting ready to meet Miona at the airport. Not only that, but Jibri announced he turned his split-pants moment on 90 Day Fiancé into an NFT called “Bubble Booming Bikini Bottoms” (likely inspired by Spongebob Squarepants). “Any cent that I get, if I make $10 off these pants, if I make a million dollars off these pants, it goes toward my independent music career.” While Jibri laid out his plans for his earnings, many fans couldn’t get over the cringe-worthy attempt to get viewers’ money.

“Umm I’m thinking worth $0,” one fan sounded off in Jibri’s comments. One follower lumped Jibri in with other 90 Day cast members with reps for shilling products online. “Another one trying to make money off the fans,” they wrote. It seems Jibri is well-aware of 90 Day-ers shilling unnecessary goods and services on social media, as he tagged 90 Day star Stephanie Matto, shouting out her questionable online entrepreneurship. “If you buy my NFT I will inhale a fart jar,” Jibri wrote to Stephanie on his Instagram Story.

As fans get to know Jibri’s motives as a series newcomer, his online presence as the season warms up is key for winning over fans. 90 Day Fiancé fans have been known to sink cast members’ rising stars on social media before, so Jibri may want to tread lightly before diving into shocking posts the likes of Stephanie’s bizarre money-making scheme. Either way, Jibri has more pants to sell before he makes it big with Miona.

Harrison Branham is a reality TV writer for Screen Rant. After receiving a bachelor’s degree in communication studies, Harrison has worked as a print journalist and freelance writer since 2019. Based out of the Baltimore-Washington metropolitan area, Harrison is an avid reality television viewer and pop culture junkie.