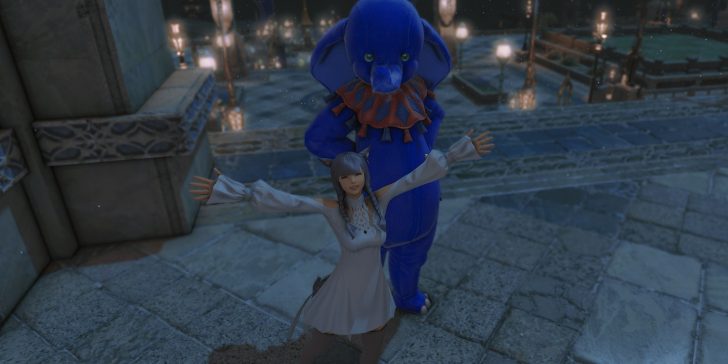 I’m a bit unnerved by how well Final Fantasy XIV knows me. After writing an entire cast of men I make myself miserable over and one Y’shtola mommy joke later, I’m convinced someone at Square Enix is reading my DMs and delivering in-game callout posts.  Patch 6.1 drove those feelings home through the Main Scenario Questline, but, in a bit of a surprise, it was perusing through Ishgard’s new Empyreum housing district that left me smitten with the update.

Ser Aymeric de Borel, Ishgard’s Lord Commander that’s so pretty he makes me physically ill, is out and about roaming the wards, but he’s not as you remember him. Eschewing his typical prim-and-proper elegance and lordly ensemble, Aymeric is… decked out in a blue elephant costume. I don’t know how else I’m supposed to explain that. The man is walking about Empyreum, delighting tourists and residents alike with the getup. I have hollered about this nonstop for a week now.

“How did we get here?” you may ask. “How is it that one of the world’s biggest political figures is toddling about in a cartoonish pachyderm costume?” Don’t worry; there’s Lore with a capital L to be had here, and I can explain how we got to this point — along with how to complete your own Ser-Aymeric-de-Borel-Dressed-as-an-Elephant Sightseeing Log.

Ser Aymeric’s adorable Ishgard escapades began back in Endwalker‘s MSQ during your final moments with the Scions of the Seventh Dawn. As everyone ponders what they’ll do with newfound freedoms, Estinien is back to talking about his employment status, Ishgard, and Ser Aymeric.

Apparently, Aymeric continues to pester Estinien about returning to Ishgard, and he’s offered the Dragoon a job. They’ve been friends since their Temple Knight days so it’s no surprise, but Estinien’s way of rejecting Aymeric’s offer is ridiculous in the best of ways. Everyone’s favorite broody boy turned himbo shares this dialogue with your Warrior of Light:

“No sooner did Aymeric hear about our disbandment than he offered me a position as a guardsman in the Empyreum district. As a former Azure Dragoon, I’m guaranteed to be popular, he said.”

“Who does he take me for!? Even without his meddling, I’m perfectly capable of finding employment─and have!”

“Word has it a false deity born in the Tower of Zot has survived, and occasionally appears to terrorize the locals.”

“Those who vanquish the being and present proof in Radz-at-Han will receive a handsome reward. Though “handsome” isn’t the word I would use to describe such outlandish garb…”

“But while I’m in Thavnair, perhaps I will acquire a set to send to Aymeric in lieu of an answer to his job offer. Let him stand guard thus attired and be the talk of Empyreum, if not all Coerthas.”

The outlandish garb Estinien mentions is the Gaja Suit, a reward from slaying the Thavnair Fate boss Daivadipa. At the time, I thought it was another endearing example of how FFXIV was growing even cheekier with Endwalker-era writing, but that was about it. I forgot about the scene, while FFXIV did not.

Estinien got that damn Gaja suit. This man went out into the world, defeated Daivadipa at least two times so he could collect its spoils, traded them for the Gaja suit and head, and then sent it to Ser Aymeric de Borel. I have so many questions for him. Like, Estinien, did you dye the suit before you sent it to Aymeric, or did he do that himself? And why an elephant costume, does Aymeric like elephants or something?  Why all this effort?  Please respond, Estinien; I need to know.

Anyway, how do I know all of this happened? Because you can go see Aymeric parading around Ishgard’s new housing district dressed as a blue elephant—the Azure Elephant, or so that’s what folks in Empyreum call him. When FFXIV Patch 6.1 went live last week, players were buzzing about seeing a strange new NPC spawning in the district. The community quickly put two and two together and realized that’s Ser Aymeric in a costume Estinien sent him. We know it’s you, Lord Commander. That sword stuck on your silly elephant hip ain’t fooling nobody.

Aymeric is all over the place, too. I first noticed him in front of the Empyreum apartments (X:11.11, Y:7.5), where two NPCs stopped to talk about him like he’s a good luck charm. You can’t interact with any of them, and they don’t hold still for gpose, so getting screenshots is a bit of a scramble.

He doesn’t stand in this spot for long, and it seems jumping between teleports and running up and down the stairs would prompt him to come back out for a repeat scene. Even this little bit is delightful, but that’s not the end of it. Aymeric does whole rounds through the district in his little outfit.

I found him again attracting a small crowd of fanboys. These guys call Aymeric “The Azure Elephant, guardian of Empyreum,” and I think we should all refer to him by that moniker going forward. You can find them in Empyreum (X:14.9, Y:11.4) using the same teleporting back and forth trick. I love that this dude feels so blessed to see him that he’s gonna go blow everything at the Gold Saucer. I understand completely.

Do we think they know it’s Aymeric, and everyone just sort of humors him? Or are these people so completely clueless they think nothing of his one-of-a-kind sword, the Naegling? I like to believe the Lord Commander thinks he’s really sneaky, but he’s not. Lucia, please come collect him before he gets stabbed again.

This spot, in front of Empyreum’s bath (X:13.9, Y:12.8), is my favorite encounter—mainly because there’s this awkward pause where they stare at each other and wave. This Elezen trying to go chill with a nice hot bath suddenly stops and stares when an elephant with a sword rolls up. His “I quite like this sort of elephant in the room!” line is hands down the best.

FFXIV has plenty of little bits like these, but I’ve got to say this one is my favorite. It’s one of those moments adding endless charm, something that feels thoughtful in the tiniest, silliest of ways and serves as a reminder that these pieces of the MMO’s world are something uniquely FFXIV. So, if you’ve got the time, I sincerely recommend you go Aymeric-hunting with some friends the housing wards. It’s a treat if you can find him.