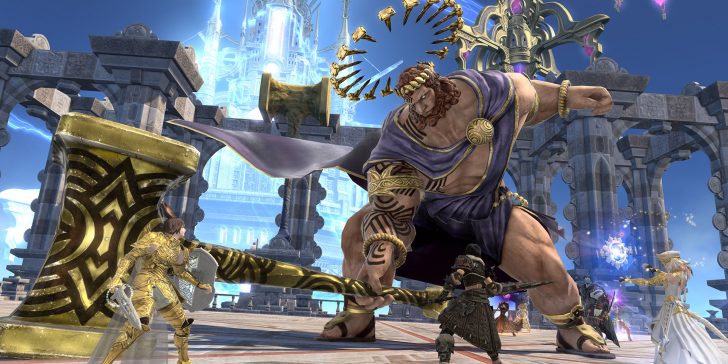 The wait is almost over for the first major update for Final Fantasy XIV in a post-Endwalker world. To tide you over for the FFXIV Patch 6.1 launch on April 12, the official preliminary patch notes have been published on The Lodestone. While it doesn’t have every single detail quite yet, there’s still plenty to dig up on the upcoming content.

Much of what’s detailed in the patch notes has been teased and showcased during the previous two Live Letters, so there aren’t any big surprises. However, we are now better prepared for the new raid, trials, and quests, and we have our first looks at some of the new items included. If you’ve missed out previous coverage, this will roundup all the important things you need to know.

Make sure you have everything sorted two days before the patch goes live since FFXIV maintenance is taking place all day (24 hours) on April 11. The preliminary FFXIV 6.1 patch notes do not include the upcoming Job changes — however, we already have a breakdown of FFXIV 6.1 Job changes. Below is our FFXIV 6.1 patch notes summary highlighting all the important information.

It’s an exciting time in FFXIV because we have no idea where the main story is going to take us. What we do know is that the “Newfound Adventure” moniker for this patch signifies the return to relative normalcy instead of dealing with imminent calamity. From the patch notes, it seems that MSQ will get 10 new quests. No surprise here, but you’ll find Tataru in The Rising Stones ready to give you the opening quest for Patch 6.1 MSQ, aptly titled “Newfound Adventure.”

With new MSQ comes a new four-player dungeon. It’s name is still hidden even though the Patch 6.1 trailer teased gameplay of the dungeon. Players will need to have an average item level of 560 or higher (which you should already meet after finishing Endwalker). This new dungeon will be added to the Expert Duty Roulette upon completion.

The most significant piece of content coming to FFXIV Patch 6.1 is the new 24-player alliance raid titled Myths of the Realm. The first leg of this raid series is called Aglaia and it’ll usher us into this wild raid to explore the mythos behind FFXIV‘s twelve gods. We have a summary of everything we know so far about what’s going on in Myths of the Realm based on the previous Live Letter.

In the patch notes, we see that the Myths of the Realm starting quest is located in Old Sharlayan given by an NPC named Fresh-faced Student (X: 9.1, Y: 11.5) — the quest is called “A Mission in Mor Dhona.” A fitting name because this will take us back to Mor Dhona to link up with some old friends at a familiar place alongside G’raha Tia.

Myths of the Realm: Aglaia Raid Requirements and Rewards

In order to run the Aglaia raid, players must complete the quest “A Mission in Mor Dhona” and have an average item level of 565 or higher. (If you need to gear up to reach this average ilvl, be sure to use our FFXIV endgame gear guide.) Like any other alliance raid, three parties consisting of one tank, two healers, and five DPS will form for this instance.

As for rewards, players will receive one item per week for clearing Aglaia — standard raiding loot procedures apply. Upon receiving an item from the loot list, player relinquish their ability to roll on all other items. The weekly reset is every Tuesday at 1:00 a.m. PT, as usual. Each alliance will get their own chest for members to loot from and the loot within is identical across alliances.

Additionally, all players who clear Aglaia get two (2) Cracked Anthoclusters and one (1) Aglaia Coin. You can exchange Aglaia Coins with the NPC named Nesvaaz in Radz-at-Han (X: 10.6, Y: 10.0) to receive materials to upgrade Radiant’s gear. For more information on Radiant’s upgrade materials and augmented gear, please refer to our FFXIV endgame gear guide.

Ensinger’s Aria is the third Extreme trial for Endwalker and is a much more difficult version of the original. It comes with Patch 6.1 and players looking to give it a try should be prepared for tough fight. As usual, you unlock the Extreme trial by talking to Wandering Minstrel in Old Sharlayan (X: 12.7, Y: 14.2). You need an average item level of 580 or higher to participate. (If you need help gearing up, be sure to use our FFXIV endgame gear guide.)

Upon clearing this Extreme trial, you will receive two (2) totems which can be exchanged for rewards with the NPC Nesvaaz in Radz-at-Han (X: 10.6, Y: 10.0).

If you’re in the mood for more challenging boss fights, you’ll want to try out Ultima’s Bane, the new Unreal trial coming with Patch 6.1. This is a reimagining of the Ultima Weapon battle in A Realm Reborn, except it is not a joke. Players will need to have an average item level of 560 or higher — players will also be synced to ilvl 565 for this one.

If you haven’t already, you’ll need to complete the level 80 quest “Fantastic Mr. Faux” to access Ultima’s Bane (Unreal). You get the quest in Idyllshire (X: 7.0, Y: 5.9) from the NPC named Painfully Ishgardian Man. And in order to access this quest, you need to complete the quest called “Keeping Up with the Aliapohs.” As such, Ultima’s Bane (Unreal) will be the available trial for Faux Hollows.

For the diligent players who completed all of the Endwalker role quests, you can take on a new questline as a sort of epilogue. The quests titled “Bitter Snow” can be found in Radz-at-Han (X: 7.7, Y: 9.4) from the NPC named Shirabaht. Seems like Fourchenault will learn a few things about putting in the work.

Again, this will only be available to those who have completed Endwalker and finished the following quests:

Part of Patch 6.1 is the implementation of New Game+ for Endwalker MSQ. If for whatever reason you want to get emotionally wrecked at any point in the future, you can. This NG+ update also includes all Endwalker role quests.

As we’ve previously covered, the story-based aspect of the Trust system is being renamed to the Duty Support system, and it’s being implemented for all MSQ dungeons in A Realm Reborn. Players can now take NPCs into dungeons as party members instead of real players if they want — these will be generic NPC and not important characters, unlike Shadowbringers and Endwalker. The Duty Support system will get its own new UI element and can be accessed under the Duty menu tab.

The Big Overhauls to A Realm Reborn Duties

Not only will you be able to run A Realm Reborn dungeons with AI-controlled teammates, but a bunch of dungeons themselves will be overhauled. Below is an exhaustive list of changes to FFXIV 2.0 dungeons from the official patch notes.

Certain mechanics in the battle with Graffias have been adjusted.
Extensive changes to general progression through the dungeon have been implemented.

The route through the dungeon has been adjusted, and the positioning of certain treasure coffers has been changed accordingly.

The duty has been changed into an instanced quest battle to be undertaken solo.

As detailed in previous Live Letters, The Praetorium is being split into separate duties with Patch 6.1. The dungeon itself will be shortened (outlined above). The fight against Ultima Weapon will be a separate four-player duty called The Porta Decumana, which will also be included in the Main Scenario Duty Roulette. The fight against Lahabrea will be an instanced solo duty.

Haha, yes! Finally, some new hairstyles for our lion boys and buns! We saw a bunch of the new Hrothgar hairstyles during the last Live Letter, but know that they are for real. If you’re wondering where their ears went, don’t ask me. Some of the character creation options for Hrothgar have been changed as well. What we didn’t see in the Live Letter, however, was the new female and male Viera hairstyles.

The brand-new competitive PVP mode called The Crystalline Conflict will make its debut in FFXIV Patch 6.1. The official patch notes run through the specifics of the new PVP mode in grave detail, so we won’t do that here. But here’s what you should know.

Two (2) teams (Astra and Umbra) of five (5) players compete in a Payload-style competitive match.
Three (3) maps are available: The Palaistra, The Volcanic Heart, and Cloud Nine. Each has unique elements, conditions, and in-match events to shake things up.
There will be major overhauls to PVP Job actions.
You can choose Ranked, Casual, and Custom matches.
There are six (6) ranks in Ranked mode: Bronze, Silver, Gold, Platinum, Diamond, and Crystal.

To get a full breakdown of the rules, strategies, and systems built around the Crystalline Conflict PVP mode, check out the official patch notes page.

This is only a beta version so the design and functionality is not final — a final version is set for Patch 6.15.

FFXIV Patch 6.1 covers a lot of ground, so we’ll run through some things that don’t necessarily need explanation but are worth highlighting.

A whole bunch of existing gear can now be equipped regardless of gender.
Unlock the Unending Codex through Patch 6.1 MSQ — this will act as your very own FFXIV encyclopedia.
Ishgard housing district, aka The Empyreum, officially opens with plots of land going on sale.
The new housing lottery system will be put in place alongside the opening of The Empyreum. (Read our breakdown of the housing lottery system.)
Dreamfitting at your character’s bed will let you try on paid-for MogStation gear to see how it looks in-game.
Number of Unsung Blades required for a Discal Tomestone will be reduced to four (4) down from seven (7).
Power of the Echo is coming to all Endwalker trials (except Endsinger’s Aria) to assist parties that wipe.
Heavensward dungeons get Explorer Mode.
Get a Pod 602 from NieR: Automata as a mount at the Gold Saucer in exchange for MGP.
Lots of new furnishing items from the furnishing design contest are now in the game.
The fight against Hraesvelgr in Sohr Khai (Lv. 60) is getting adjustments.
Bozjan Southern Front gets changes such as better EXP gains from Castrum Lacus Litore and Dalriada.
New emote will be available.
Sightseeing log looks cooler.
Some very notable adjustments will come to Wondrous Tails.
Weekly restrictions on rewards from Pandaemonium Asphodelos raids are being removed.
Garo collab is back, and you can get these sweet gear pieces in the Wolves’ Den Pier PVP zone or by using MGP in the Gold Saucer.
Players who die in by falling off the edge of the arena in trials from A Realm Reborn and Heavensward can be revived!