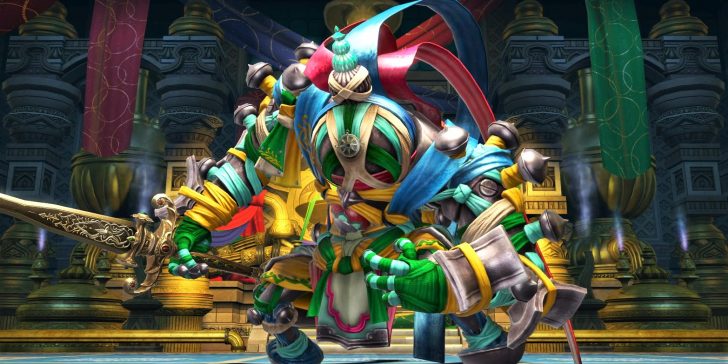 New quests in MSQ means a new dungeon to run. Thanks to Final Fantasy XIV Patch 6.1, we get a newfound adventure and a fresh start for our Warriors of Light, but this doesn’t mean we’re not getting ourselves into trouble. And trouble you will find in the new four-player dungeon called Alzadaal’s Legacy. It features some surprisingly tricky mechanics compared to what we’ve seen through much of Endwalker, but we have you covered with our Alzadaal’s Legacy guide here.

Shortly after going through a handful of quests in MSQ, you’ll convene with a few of your Scion friends in Thavnair before setting sail to uncharted territory. Yes, the heroes of The Final Days are now plundering for treasure in territory they don’t really have business being in. Oh, how the mighty have fallen. But this is a fun one with some great lore implications once you pass its gauntlet. Get ready to telegraph some new attacks, calculate angles, and spin away from spikes.

Once you arrive in the misty jungle out at sea, you’ll be greeted by Alzadaal’s Langurs, which make for a basic trash mob. But if you venture further for a bigger pull, you’ll be ambushed by Alzadaal’s Qutrubs — run past their AoE markers from the ambush to avoid taking damage and burn them down. The Qutrubs occasionally do a point-blank AoE called Whirling Slash, so be ready to dodge this.

The second set of trash mobs in this section consist of Alzadaal’s Vajralangulas and Alzadaal’s Asvattha. The Asvattha is basically a Morbol and it casts Bad Breath like one — avoid this cone AoE to avoid damage and debuffs. When venturing further for a wall-to-wall pull, you’ll be ambushed by another pack of Alzadaal’s Qutrubs. Handle them by moving past their initial AoEs and burn them down, too.

The first challenging encounter in Alzadaal’s Legacy is an big glowing squid called Ambujam in a circular arena. It has a few tricky attacks that need a sharp eye to avoid, so be ready to read its moves — even if you use Duty Support party members, the fight is designed so that you can’t rely entirely on their movements.

Big Wave: A party-wide attack that hits around 1/3 of your HP. Healers do your thing.

Tentacle Dig: Ambujam will stick a tentacle into the water and you see a trail swimming around the arena. Wherever the trail stops will be the focal point for a large point-blank AoE that’ll cover most of the arena. Run to the further end from the focal point.

Tentacle Dig (x2): Ambujam will follow up by sticking two tentacles into the water. This mechanic works the same as the original, but you need to keep an eye on two swimming trails simultaneously. These will make for two large AoEs from their focal point, and you’ll need to run to either the north/south or east/west ends of the arena (depending on where the trails end) to avoid damage.

Toxic Fountain: A series of circular AoEs scattered around the arena. These will be marked in three parts to signify the sequence in which they’ll go off. Stand in an AoE that was set last, then wait for the first set to fire off, then run toward a safe zone where AoE already fired off.

Ambujam will cycle through these mechanics until it is down. Healers, take note that every Big Wave after the first one will hit a bit harder, taking out around half a players HP. If you’re playing with Scions as AI teammates, they will teleport to safe zones just moments before Tentacle Dig fires off its AoEs — this means you can’t solely rely on their positioning to avoid damage and need to read the mechanic for yourself.

The second set of trash mobs might pose a threat if you’re not careful. First, you’ll pick up Bounty Cracklaws and Bounty Rockflins — Cacklaws will occasionally use a large point-blank AoE called Flush, be sure to avoid it.

The tough part comes when you do a wall-to-wall pull. Alzadaal’s Rampart summons three adds in three waves —a Bounty Xzomit, Bounty Ogrebon, and Bounty Monk each time only seconds apart from each other. This makes for a total of 10 enemies at once, which might be tough on healers. Ogrebons may cast Flounder (short line AoE) toward a party member and Monks sometimes cast Water III (point-blank AoE).

The second part in this trash mob sequence is kind of a repeat. This time you’ll face Bounty Vepars, Bounty Uragnites, and a Bount Ruszor. Vepars cast Screwdriver, which is a short frontal cone AoE. Uragnites sometimes cast Palsynyxis which is a more narrow cone AoE.

Again, you’ll confront Alzadaal’s Rampart that summons three adds in three waves, too. This time, it’s two Radiant Crabs and a Clawtrap Alzadaal XIV for the first wave, then three Radiant Crabs in the second and third waves. The Clawtrap Alzadaal XIV will sometimes cast Water III (point-blank AoE), so watch out for that. They’re easy to burn down as long as you’re careful.

If your party is good enough, you can hammer on Alzadaal’s Rampart with strong single-target attacks to kill it before its last Reinforcements cast finishes, effectively cutting off a wave of adds so you don’t have to deal with them. No sweat if you don’t, though.

You’ll fight Armored Chariot in a square arena. This one has some tricks up its sleeve with lasers bouncing from different directions, so you’ll need to have a sharp eye to dodge them and avoid damage. It’ll also combine mechanics to keep you on your toes, so you can’t just follow a party member who knows what they’re doing.

Articulated Bits: This move has several components to it. First, Armored Chariot sets a persistent point-blank AoE around its hitbox that deals damage if you’re standing in it. Then it summons four lasers, one on each corner of the arena. They’ll fire off two-at-a-time from opposite ends. You’ll be able to tell which part of the arena it’ll hit by the position of Armored Chariot’s purple energy shields or by looking at the number of dots above the lasers themselves — the quadrants of the arena between the lasers and shields will be hit once the lasers fire. Dodge these accordingly while avoiding crossing the AoE in its hitbox.

Diffusion Ray: A party-wide attack that deals roughly around half a players HP.

Articulated Bits (Version 2): This is the hard part. The persistent point-blank AoE in the hitbox returns, but now we have to deal with six lasers in total. Two lasers will be positioned on opposite corners of each other, indicated by the position of Armored Chariot’s shields again — remember, the quadrants between the shields and lasers will be hit. What’s new is that there will be four lasers running parallel to the arena that will shoot off in a line. All six lasers fire at the same time covering most of the arena in deadly beams. Observe their positions and quickly determined which narrow sliver of the arena is safe.

Articulated Bits (Version 3): Yes, there’s a third version of this attack. It’s much like the first version — four lasers, one in each corner that fire off in pairs, indicated by the enemy’s shield position and dots above the lasers. The trick this time is that each party member will be marked with an AoE, which will drop at the same time as when second set of lasers fire. This means party members need to spread out while finding a safe zone from the laser, and it could be deadly if you don’t anticipate it.

Armored Chariot will repeat these mechanics until it’s down. It may mix up the types of Articulated Bits is casts — whatever the case may be, pay attention to the laser positions. If you get hit by any combination of these attacks, you’re likely to die, so keep your head on a swivel.

Your final mob to deal with consists of two Mystic Weapons and two Alzadaal’s Guardians. Nothing you haven’t seen already — easy money.

The last boss in Alzadaal’s Legacy is a colorful one, but they’re not messing around. Even if its attacks are whimsical, they can wipe you out if you don’t know how to handle them. To upfront, you’re going to have to deal with some weird directional inputs that you won’t be in full control of, but if you ask me, it’s pretty fun. Let’s do it.

Billowing Bolts: This just sets up spikes along the border of the area, creating a danger zone you’ll want to avoid throughout the fight.

Spin Out: Here’s the fun part. Kapikulu will move to the north end of the arena and tether to each party member. Then certain tiles on the arena will be temporarily set with spikes, indicated by AoE squares. Then you’ll be pulled toward the boss, covered in colorful threads, and wildly spun around the arena. You have minimal control of where you spin, but you need to use directional inputs to steer yourself around the arena while avoiding spikes. If you end up in spikes for too long, you will die.

Billowing Bolts (Version 2): This time, this hits as a party-wide attack. Healers ready.

Wild Weave: Kapikulu will cast down tied-up curtains from above consisting of two colors, green and yellow. The boss will then tether to one of the curtains by casting Power Surge.

Power Surge: A purple tether indicates which colored curtain Kapikulu will fire AoEs from. For example, when the boss tethers to a yellow curtain, all yellow curtains in the arena will be focal points for large point-blank AoEs. Of course, the same holds true if they tether to a green curtain. The easiest thing to do is just stand next to the opposite colored curtain.

Rotary Gale: Each party member will be marked with an AoE. Spread out as necessary.

Spin Out (Version 2): The second Spin Out is pretty much the same as the first, except this time you’ll also have to avoid two large line AoEs called Basting Blade, in addition to all the spikes scattered around the arena.

Basting Blade: As mentioned above, this is paired with the second Spin Out. Two Basting Blades will be cast one after the other, and each covers roughly one-third of the arena with a line AoE.

These mechanics will repeat until Kapikulu is down. You may also see Rotary Gale cast immediately after the Wild Weave and Power Surge combo, so be on your toes to spread out from party members right after avoiding large AoEs. I don’t know about you, but that Spin Out mechanic is pretty damn fun!

Hopefully this helped with your run of Alzadaal’s Legacy, the new MSQ dungeon available in FFXIV via Patch 6.1. We’ll be sure to update this guide, if necessary. For more on this big update for the game, be sure to read up on everything else packed into FFXIV Patch 6.1, all the Job changes made with 6.1, or how to cop that sweet NieR Pod 602 mount. And since you aced the battles in this dungeon, how about you give the new Myths of the Realm: Aglaia alliance raid a try.