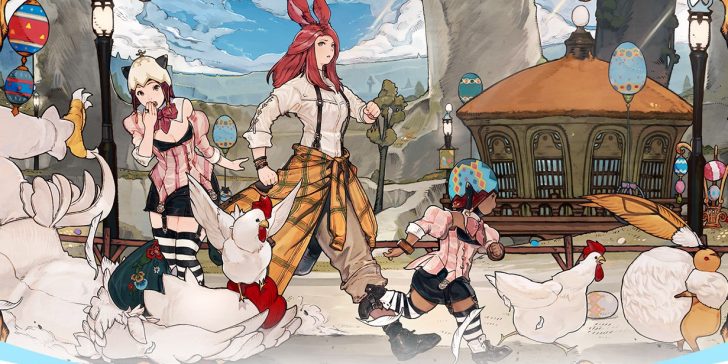 Shortly after the launch of Patch 6.1 in Final Fantasy XIV on April 12, players will be able to take part in the next seasonal event. FFXIV will start the Hatching Tide event on April 13 at 1:00 a.m. PT and it will run until April 27 at 7:59 a.m. PT. It’s a sort of Easter-adjacent event where your Warriors of Light can get a few themed items. But if you don’t like eggs or bunnies, sorry?

When the event starts, the NPC named Jihli Aliapoh will appear in Old Gridania at Mih Khetto’s Amphitheater (X: 10.2, Y: 9.4) and she’ll kick off the Hatching Tide questline. Note that you’ll need to have at least one Job at level 15 to participate. Through the Hatching Tide quests, you’ll earn the Hatching Bunny minion and the Eat Egg emote, as well as the Eggsemplary Basket and Hatching-tide Mobile for your home. You can see each reward as they appear in-game in the image below.

In addition to the roster of 2022 Hatching Tide quest rewards, players who missed the event in previous years can buy the old quest rewards from the nearby vendor named “Egg Advocate.” Unfortunate name, to be honest. By the way, has anyone asked the Viera how they feel about this event?

In the meantime, don’t miss the current Moogle Treasure Trove event. It ends on April 11 once FFXIV goes into maintenance for Patch 6.1. We have a whole Moogle Treasure Trove and Irregular Tomestones guide to help you quickly earn its unique rewards, which includes running the old Void Ark alliance raid and a handful of dungeons. Be sure to catch up on all the exciting new content coming to FFXIV Patch 6.1, including all the new minions and mounts, the Myths of the Realm alliance raid, and a whole bunch of quests and bosses to take on.