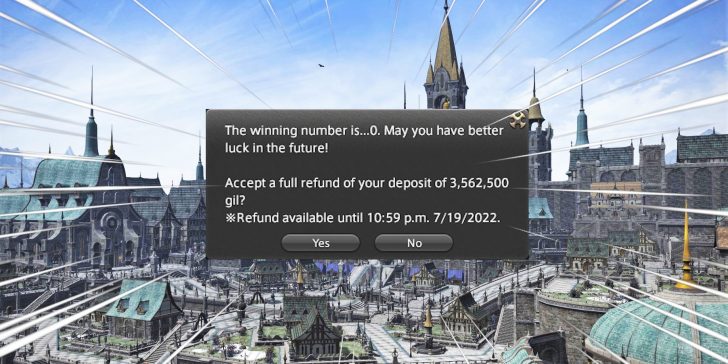 With the recent Patch 6.1 update, Final Fantasy XIV implemented a new system for how players acquire in-game housing. However, this new FFXIV housing lottery did not go according to plan. Several players who entered the lottery in hopes of drawing the winning number to purchase their desired plot of land were left out to dry — not because they necessarily lost the drawing, but because of critical bugs in the system. Director and producer Naoki Yoshida has been keeping players updated on the situation. And he gave yet another update covering the FFXIV team’s plans to address these issues.

In a blog post on the official FFXIV site The Lodestone, Yoshida-san said the team has a four-step approach — reproducing the bugs, fixing the issues, verifying the fixes, and most importantly, restoring the data from the lottery results. This is good news to those who were met with the erroneous notification, “The winning number is…0. May you have better luck next time,” when the results for this first round of the housing lottery concluded. So not all is lost.

The root of the problem is that you can’t draw the number 0 in the lottery system. And even players who were the only entrant in a particular lottery would still lose to a faulty “0” as the winning number. The result would even say that there were no participants in the lottery. When explaining why this could happen, Yoshida-san said, “While the server responsible for conducting the lottery is functioning as intended, the results are not being properly relayed to the servers responsible for managing housing-related data.”

Regardless of the reason, affected players should know that the intended lottery results can be restored. Yoshida stated, “Once this issue has been resolved, and lottery results can be relayed to the housing data servers without issue, it will be possible to confirm the lottery winners.” He also said that affected players do not have to re-register in the lottery for the plots that were hit by the bug. Resolving all the issues is going to take time, however.

The one lingering issue is with Gil refunds. You need to pay for the housing plot in full to enter a drawing. If you lose the drawing from a lottery, you can get a full refund. Some players who lost their respective lotteries to a faulty result have went ahead with the refund already. Yoshida-san stated that solutions for these particular situations are still being considered and the team will outline a process to address this in a later update.

FFXIV housing lotteries are intended to run on a continuous nine-day cycle, but it’s currently on hold for now and will be reinstated at a later date. While the issues have been identified, troubleshooting and testing the fixes is going to take time. When the fix is ready, it will require a maintenance period for all Worlds in order to implement it. Both the housing lottery system fixes and the proper lottery data restoration will be implemented simultaneously.

Players who took part in a normal drawing do not have to worry about anything. Winners will not have to relinquish the plot they won, and can continue with the process as intended (though they still need to claim the win). Losers should claim their Gil refund in the next 90 days.

There was still hope for those who had bugged results in the lottery after all. Thus, the FFXIV team is effectively saving poor Ser Aymeric from turning that blue elephant costume into a metaphorical clown suit as he tours the new Ishgardian housing district. Be sure to catch up on the FFXIV 6.1 housing crisis in our previous story. And if you’re still working your way through the new content, you can use our Endsinger EX trial guide, Aglaia alliance raid guide, or 6.1 endgame gear guide for some help.