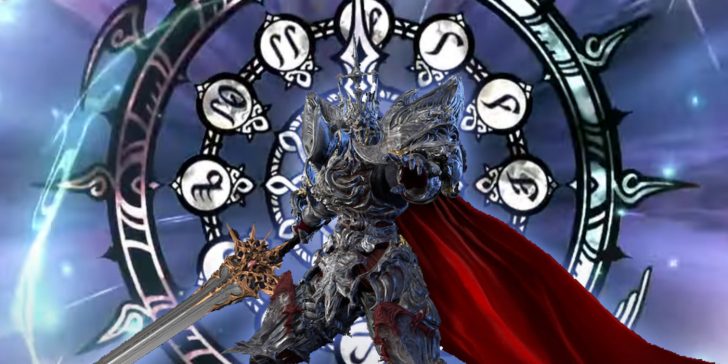 The death of Haurchefant Greystone is one of the major lynchpins of Final Fantasy XIV: Heavensward. The illegitimate son of Edmont de Fortemps, Lord of House Fortemps, Haurchefant is the hero of Ishgard-focused expansion. He meets his death valiantly following The Vault dungeon, when his heroic bearing couldn’t stand up to a treacherous aetheric spear

What if you had the chance to change things, however?

At least part of the FFXIV community has the chance to do so now. Hardcore players are currently diving back into the events of the Dragonsong War with the new raid encounter, Dragonsong’s Reprise (Ultimate). This level 90 raid was added in Patch 6.11 and acts like an extremely challenging boss gauntlet, reimagining several iconic Heavensward battles, including King Thordan, Estinien-Nidhogg, and even more Nidhogg. One fight, against Ser Charibert and his cronies, even reprises Haurchefant’s death each time, playing out on the battlefield, rather than in a cutscene.

The twist came when the raiders finished the fight against Nidhogg’s eyes, at which point players are presented with time being reverted, along with text stating, “Thus did one song draw to a close. But here and now, the minstrel shall perform another… a song of imagination transcending.” Because all the enhanced raids in FFXIV are stories told by the Wandering Minstrel (aka in-game Naoki Yoshida), who is embellishing your battles to give them more mythical weight.

Raid group Krile (not the character herself) actually showed the time reversion happening on Twitch. Haurchefant died once again and the raid group followed the same progression as before. The addition of another Limit Break stock led to fans wondering if perhaps the valiant knight could be saved by using either a Healer or Tank’s third Limit Break. And Krile proved that was indeed the case.

In a later attempt, the raid group uses the Tank LB3 to limit the amount of damage incoming to Haurchefant. With that done, it was a matter of healing him and attacking the Spear of the Fury that he’s fending off . Once they had saved him, the raid was thrust into an alternate timeline, with the Minstrel stating, “‘Tis said that there are no ifs in history, yet man is wont to dream. Let us dream, then, of a future where a dear comrade lived…”

The new fight after this is against a different incarnation of King Thordan. And this is where most of the raid groups that are progressing through Dragonsong’s Reprise (Ultimate) are stuck. We’re already at five phases and one intermission in the fight, which is the current maximum in phases compared to previous Ultimates. Who knows how long it’ll be until one of the raid groups clears the encounter?

Can we truly save Haurchefant? Probably not, as this is still a story of the Wandering Minstrel. But perhaps we can catch a glimpse of a different future, where a hero survived a fatal blow. Maybe there’s a chance that through time travel and magic, Haurchefant might wander the streets of Ishgard and see the future he created.

If you’re interested in following the World First race to finish Dragonsong’s Reprise (Ultimate), you can head over to the MogTalk twitch channel for their commentary. Or you can peep this FFXIV subreddit thread with links to all the raid groups tackling the fight.