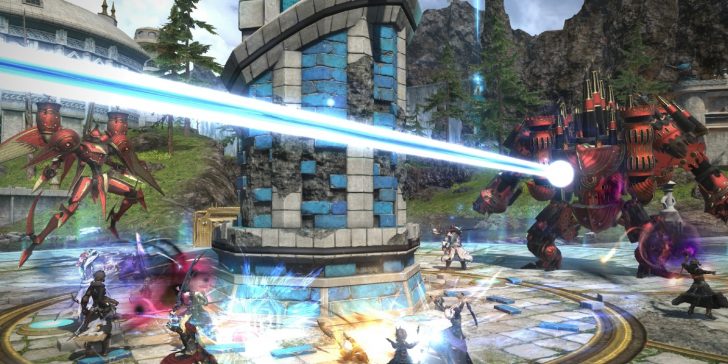 Final Fantasy XIV is adding things so often that we sometimes don’t notice the stuff that’s going away. Soon, Cape Westwind will no longer be poor Rhitahtyn getting his face stomped in by eight players. If you’re hungry for the Yo-Kai Watch minions, you simply have to hope the collaboration event comes around sometime soon. (Get your Rathalos while you can!)

PVP is another facet of this. As one PVP event type rolls in, another is displaced. In this case, Rival Wings is going away, to be replaced by Crystalline Conflict in Patch 6.1 while Square Enix does some fixes. Rival Wings was a 24×24 large-scale PVP mode added way back in Patch 4.15. It worked somewhat like a MOBA with two teams fighting for control of several towers along set lanes.

With Rival Wings going away, the community is celebrating its hiatus. PVP Revival is doing a “Goodbye Weekend” for the PVP mode. The community celebration will be happening on North American and European servers this weekend. Here are the planned meetup windows for each data center:

Players who are interested in participating can head over to the PVP Revival Discord to coordinate with the hosts.

We use the phrase “celebrating its hiatus” deliberately. The problem with Rival Wings was that no one queued up for the mode unless they were farming the mount or it was during a Moogle Treasure event. Without a large, consistent influx of players, a 24v24 mode just doesn’t work. You wait in the queue forever only to give up an hour later, meaning you’re not there for when someone else queues up. In contrast, Crystalline Conflict seems like a direct response to this problem, with a smaller 5v5 mode and a gameplay focus similar to Overwatch’s payload objective.

Patch 6.1 will be released on April 11. While you wait for the upcoming patch, you can read all about the upcoming FFXIV 6.1 Job changes. We’ve also covered everything from the last  Live Letter, like the new Myths of the Realm alliance raid and new mounts and minions.