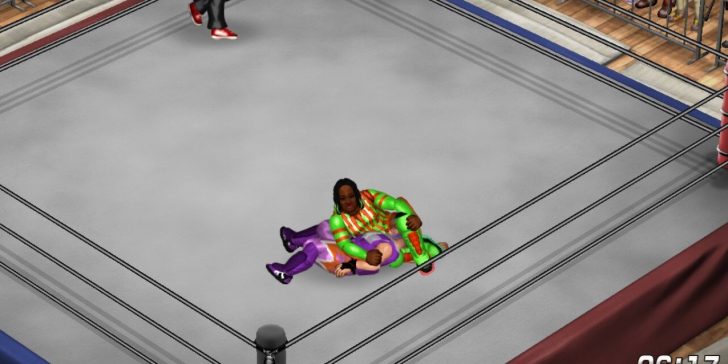 I took WWE 2K22 for a spin on PC last week. I combed through dozens and dozens of community creations, downloading expertly-crafted visual recreations of non-WWE wrestlers like CM Punk and Toshiaki Kawada. I downloaded wrestlers, belts, arenas, movesets — you name it. I wanted to flesh out my experience before diving into Universe Mode, the franchise’s anything-goes sandbox. And then I went to play it.

I’m not sure as to whether it’s a terrible PC port or not optimized for downloading many community creations; I just couldn’t get it to load in under five minutes on my high-end desktop. I couldn’t even get matches started without crashes. What’s worse, though not unexpected, is that WWE 2K22 isn’t Steam Deck-ready at the moment.

So what was I to do to get my wrestling fix on PC? It was to, of course, go back to my true love: Fire Pro Wrestling World.

The latest Fire Pro isn’t particularly new — it’s been out for PC since 2017 and PlayStation 4 since 2018 — but it is the purest form of one of the most meticulously-crafted video game franchises. For the uninitiated, Fire Pro Wrestling World is the most recent entry in a long-running 2D wrestling simulation with a pronounced focus on customization and hard-to-pick-up, harder-to-master gameplay. With the ability to tweak an individual wrestler’s AI, folks in the community have created stunning behavioral facsimiles of classic, modern, and made-up wrestlers. Want to know how late 80s Bret Hart, 2022 Asuka, or 1995 George Costanza would perform in a wrestling match? Someone has taken the time to develop an AI profile for the wrestling version of them.

On PS4, the system for acquiring new community creations is a convoluted mess. You have to log in to a specific site, enter your PlayStation ID, and use a terrible search interface to find what you’re looking for. With the Steam Workshop, your ability to find the right creations to build your perfect pro wrestling sandbox is facilitated by better sorting and quicker subscriptions to each item.

On Steam Deck, this process is quite lovely! You can access the Workshop directly in the SteamOS interface and add content easily, which also syncs to the cloud so you can use your creations on Steam Deck or on your computer. Fire Pro Wrestling World is a game of profound depth, which always seemed to make sense for handheld. It’s not a mystery as to why Fire Pro Wrestling and its sequel, Fire Pro Wrestling 2 on Game Boy Advance, remain popular games among the community today.

Steam Deck ultimately stands as a native device that plays a modern Fire Pro game perfectly. If this is your first go-around with the game, I have some tips and notes for you:

This game is an acquired taste to play, which is why a lot of people (like me) prefer to sim the game, i.e. build a sandbox and manage CPU vs CPU matches like running a federation.
However! Fire Pro Wrestling World does a better job explaining its systems than previous entries in the series. Give its single-player modes a whirl and see if you dig it.
Find your favorite creators and latch onto them!

Kradiation is a great PC-based creator who has not only custom moves for each wrestler but also custom visual components. Understand that using a ton of Kradiation edits (that’s vernacular for Fire Pro custom creations) will cause a long load when you first play the game because it has to download and sync every single item.
Avenger3 is a Fire Pro creation legend who is on top of every era of wrestling, has excellent AI, and typically uses fewer visual edits. As a result, wrestlers are extremely accurate in moveset and behavior but aren’t quite as spot-on visually as Kradiation and some other users. My most recent Fire Pro Wrestling World save uses almost all Avenger3 edits, which makes the gameplay very consistent across all matches.
Really active creators will create Collections, which sort their wrestlers into categories. For example, if you’re interested in running AEW shows and alternate past 80s NWA shows, creators will make finding these assets pretty easy for you. Just have fun looking through active creators’ profiles and grab what excites you!

If you take this game for a spin, let me know! I’ve been trying to manifest a truly handheld version of modern Fire Pro for over a decade now, and I thought Nintendo Switch would deliver, but it was Gabe and his Sega Nomad-ass brick. Hey, I’ll take it.