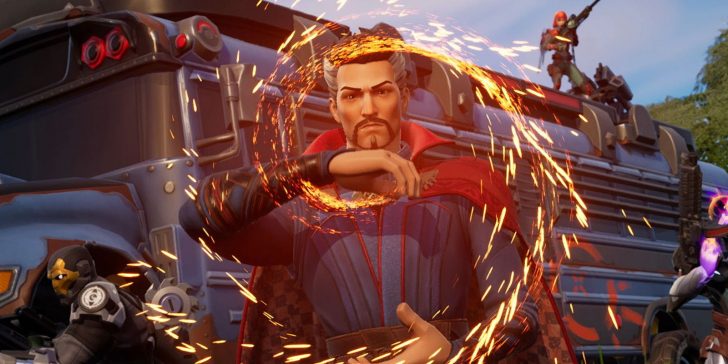 Doctor Strange is officially coming to Fortnite, as confirmed by the recent high-octane Season 2 trailer cinematic. A leak seemingly revealed the Sorcerer Supreme’s arrival in Fortnite as the latest guest character skin from Marvel Comics earlier this week, and he will be joining fellow heroes like Spider-Man and notorious villains like the Green Goblin when he lands on the island as part of Fortnite’s ongoing Chapter 3. This latest era of Epic’s constantly evolving battle royale title sees the inhabitants of the Island still reeling from the world-altering events of Chapter 2, and recent rumors have hinted that more devastation could be coming to landmarks like the popular Tilted Towers – which means that Fortnite could probably use a few more superheroes.

While Dr. Stephen Strange has been a staple of Marvel Comics since his introduction in the pages of 1963’s Strange Tales #110, the brilliant neurosurgeon-turned-Master of the Mystic Arts has gained a fair bit of notoriety in recent years thanks to Benedict Cumberbatch’s portrayal of him in the MCU – including his most recent appearance in the upcoming Doctor Strange in the Multiverse of Madness. Gaming-wise, Strange is set to utilize his incredible magical abilities in Marvel’s Midnight Suns, a tactical RPG by XCOM developer Firaxis Games that sees various Marvel heroes join forces with a fully customizable character known as “The Hunter” to save the world from a demonic army.

Before he challenges this dark horde alongside his fellow crimefighters, Doctor Strange is making a quick interdimensional detour to The Island, as confirmed by Fortnite’s new Chapter 3, Season 2 trailer cinematic (via the official Fortnite Twitter account). In this colorful and action-packed CGI mini-movie, the inhabitants of the Island find themselves faced with a new invading force – only for a familiar-looking portal to open up behind them and reveal Doctor Strange himself leading a squad of reinforcements that includes Iron Man, Fortnite’s resident super soldier The Foundation (as portrayed by Hollywood star and wrestling icon Dwayne “The Rock” Johnson), and even The Prowler – who is also being added in Season 2 alongside several other playable character skins.

As noted before, Fortnite has seen many guest appearances from characters across movies, comic books, and even video games over the years – from triple-A gaming protagonists like Ezio Auditore of Assassin’s Creed fame and Horizon Forbidden West’s Aloy to real-life celebrities like Ariana Grande and Lebron James. Even more special guest Fortnite skins are leaked and hinted at quite frequently, as shown when the cover to Fortnite’s impending comic crossover with Marvel left players guessing that Wakanda’s resident princesses and tech genius Shuri would be joining her brother Black Panther in the ranks of comic book heroes who have graced Epic’s massively successful online battle royale title.

With Doctor Strange set to return to the big screen this summer and Marvel’s Midnight Suns said to be released sometime later this year, the timing is just right for the Sorcerer Supreme to make his presence felt in Fortnite as part of the ongoing Chapter 3. Players will be able to unleash Doctor Strange’s arcane might on opponents when Fortnite Chapter 3, Season 2 goes live later today.