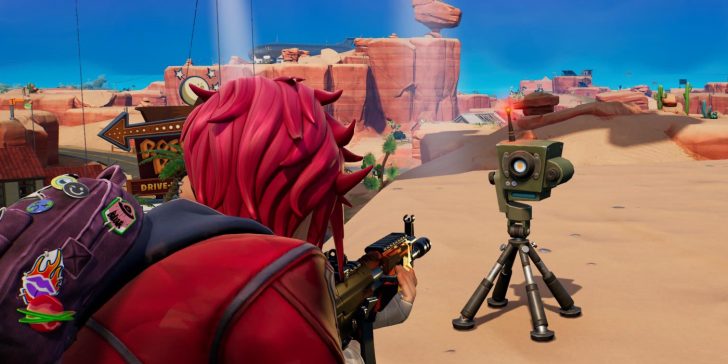 Fortnite Chapter 3 Season 2 is in full swing, bringing map changes, a new battle pass featuring Marvel’s Doctor Strange and Prowler, and tons of challenges to complete. From seasonal quests to a new character collection to complete, there is no shortage of activities at hand. This guide focuses on the Fortnite Deploy Sensors at Logjam Lumberyard, Tilted Towers, and Rocky Reels quest, which debuted in the first weekly batch of the season.

If you’re in need of more help, we have guides covering the find and destroy a clocked IO Build Jammer, plant a data scraper at the tail of an IO Airship, search chests on IO Airships, and launch yourself from a Siege Cannon quests. Yes, all names are absurdly long.

As part of the Fortnite Resistance quests, you’re tasked to deploy sensors at Logjam Lumberyard, Tilted Towers, and Rocky Reels. This quest unlocked for me after the tasks to find and destroy a cloaked IO Build Jammer, as well as to retrieve IO envelopes with top-secret plans.

Under the premise of “ready to spy on Slone?” from Jones, you need to deploy a sensor in each one of the locations (as opposed to three sensors in just one area). Don’t worry, you can do this across different matches, which is probably the best way to complete the quest as they aren’t exactly close. The order doesn’t matter, but I started with Rocky Reels.

You can find a spot to deploy a sensor in Rocky Reels southwest of the center, placed on top of a slope overlooking the town.

Let’s continue. There’s a spot to deploy a sensor in Tilted Towers southwest of the town, placed once more on a higher slope overlooking the nearby buildings. If you’re arriving at the location using the southern road, take a detour to the left to stumble upon it.

Lastly, there’s a spot to deploy a sensor west of the cabin in Logjam Lumberyard. It’s yet on another slope that faces the massive yard with logs pilled up in batches.

That’s it for this quest! That being said, both Tilted Towers and Rocky Reels are perfect spots to search chests on the IO Airship, as well as to launch yourself from the Siege Cannon when you inevitably have to escape. Depending on how everything goes during a match, you likely won’t be able to get to all three spots in quick succession. But if you want to attempt it, you can try to land on Logjam Lumberyard, grab any nearby vehicle, and quickly make your way to Tilted Towers to at least get two sensors out of the way.

Remember that you first need to complete the introductory missions that involve you establishing Device Uplinks across specific locations around the battle royale map. This makes for a great chance to discover the new areas that have arrived with Chapter 3 Season 2 — including the outposts — if you already haven’t.