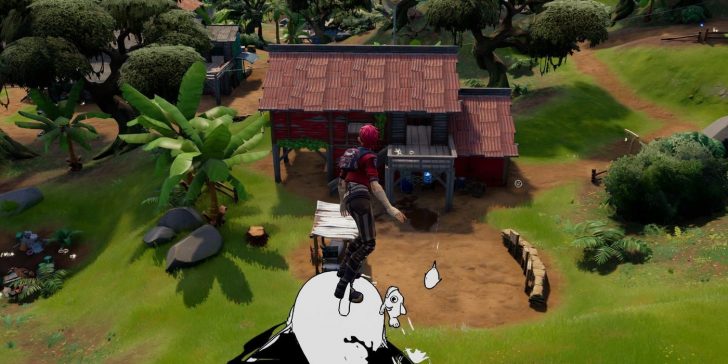 Fortnite Chapter 3 Season 2 is in full swing, bringing map changes, a new battle pass featuring Marvel’s Doctor Strange and Prowler, and tons of challenges to complete. From seasonal quests to a new character collection to complete, there is no shortage of activities at hand. This guide focuses on the Fortnite Destroy Structures Above a Data Receiver, Then Collect Its Data quest, which debuted in the third weekly batch of the season.

If you’re in need of more help, we have guides covering all Chapter 3 Season 2 weekly quests, all Resistance quests, Omni Chips to upgrade your Omni Sword, when is building making a return, and Fortnite tank locations to collect armor samples and deliver a tank to a Seven Outpost.

Fortnite Destroy Structures Above a Data Receiver, Then Collect Its Data Location

As part of the Fortnite Resistance quests, you’re tasked to destroy structures above a data receive, then collect its data. This quest is unlocked after completing the Destroy Road Barriers Using the Cow Catcher or Battle Bus and Hit Different Targets With a Sniper From at Least 75 Meters Away objectives.

Let’s get into the steps. You first need to complete the Establish Device Uplink near Camp Cuddle or The Joneses objective. You’re free to choose either of them, although I went to The Joneses for this quest.

Once you’re done, the next step involves destroying structures above a data receiver, followed up by collecting its data. It’s a confusing task, but it’s far easier in practice. I went over to The Joneses for this, but if you’re near Camp Cuddle, there is a spot near that area as well.

At The Joneses, the data receiver location is on the southern house, approaching it from the northern side (using the map as reference). Once you’re close, The Imagined is going to mention that the structure above the receive is messing up with the signal.

All you have to do is destroy the ceiling that is right above the receiver — you don’t need to destroy the whole house. Feel free to use your pickaxe for this and after a few seconds you should be all set.

Then, all you need to do is to interact with the receiver to collect its data. There is a chance of stumbling upon other players nearby, so as always, I recommend to land to the spot directly from the battle bus and complete the steps as soon as possible.

That’s it for this quest! If it doesn’t appear available for you right away, make sure to complete the deploy sensors at Logjam Lumberyard, Tilted Towers, and Rocky Reels and find and destroy a clocked IO Build Jammer quests beforehand. For some reason, the Resistance quests stay within one single slot in the Quests tab instead of a list, so make sure to double-check that you haven’t missed any.

In case you haven’t already, make sure to stick around Rocky Reels to search chests on the IO Airship, as well as launch yourself from the Siege Cannon when you inevitably have to escape. If you’re looking for a series of challenges that aren’t quite as hard as they sound, make sure to follow through with them as soon as possible to start leveling up your battle pass.