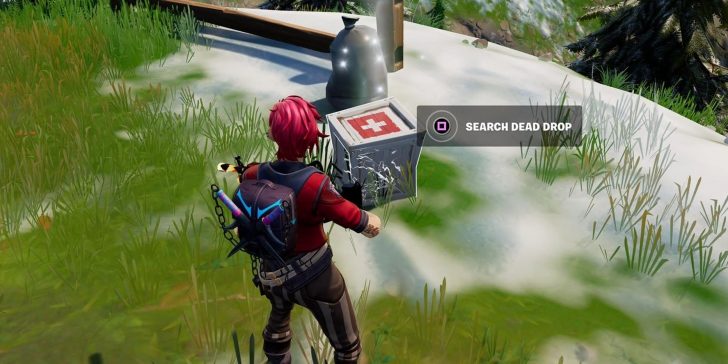 Fortnite Chapter 3 Season 2 is in full swing, bringing map changes, a new battle pass featuring Marvel’s Doctor Strange and Prowler, and tons of challenges to complete. From seasonal quests to a new character collection to complete, there is no shortage of activities at hand. This guide focuses on the Fortnite Secure Insider Intel from a Dead Drop quest, detailing the steps.

If you’re in need of more help, we have guides covering all Chapter 3 Season 2 weekly quests, Omni Chips to upgrade your Omni Sword, how to unlock Prowler, the Lantern Trials, and objectives such as fall 10 stories or more without taking damage.

As part of the Fortnite Resistance quests, you’re tasked to secure insider intel from a Dead Drop spot. This quest is unlocked automatically after you’ve completed the set up recon cameras to get more info about the IO Doomsday device and eliminate IO forces to steal IO credentials objectives.

Let’s get into the steps. First, you need to establish a Device Uplink near Chonker’s Speedway, Logjam Lumberyard, or Seven Outpost III. All three locations are fairly distanced from each other, so the choice is up to you — I went for the one up north at Logjam Lumberyard. For this specific location, head east of the gas station that is to the left of the area.

From here, you secure insider intel from a Dead Drop. Regardless of where you established the Device Uplink, there are three possible spots to complete this step, each being close to the three original locations. Since I went for Logjam Lumberyard, I went to the spot closest to it.

Referencing the gas station as your starting point, head southwest following the road. At one point you’re going to find a cliff that leads to an empty lot with only a few abandoned vehicles nearby. This isn’t close to the mountains next to the ocean to the far left, only slightly to the side of the road.

Once there, look for the white box that has a medical logo on top. Then, go ahead and interact with it to finish the quest.

That is all for the Fortnite secure insider intel from a Dead Drop objective! This is by far the easiest of this week’s Resistance quests, as it only requires a short walk from one step to the next. That being said, it took me a long while to find where to establish the Device Uplink, as it seems the spots from previous weeks have been shuffled around. For Logjam Lumberyard, as long as you’re close to the gas station, you won’t have trouble locating it.

Remember that if you don’t see this quest yet, you still need to tackle the objectives from last week, which includes quests such as plant wiretaps to monitor IO communications and set up a direct relay with the paradigm near Sanctuary.