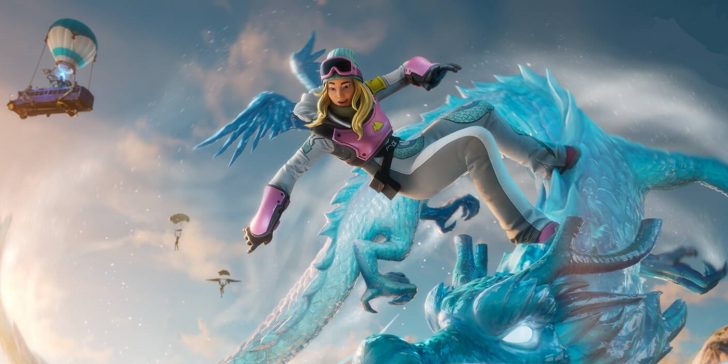 Chloe Kim, the two-time Olympic gold medal snowboarding champion, is getting her own Fortnite skin starting March 26. As part of the game’s Icon Series, the paid Chloe Kim Outfit presents four alternative styles, as well as a couple cool ice-themed accessories, including an ice dragon glider. Players can also take part of the in-game Chloe Kim Cup for a chance to unlock the outfit and other rewards ahead of time.

The Fortnite Chloe Kim outfit comes with four variants: Back to Back, Pink Poppies, Icy Infusion, and Deep Freeze Style. These variants are all in addition to the default appearance, which is neat. In terms of accessories, the outfit includes the Sub-Zero Flight back bling, but there’ll be additional ones available to purchase separately, such as the Frozen Flourish pickaxe, Nunbola glider, and the Board Flair emote, which has Kim doing a snowboard trick. You can either purchase the items individually or with the Chloe Kim Bundle, which also includes the Nunbola’s Flight loading screen. The Back to Back and Deep Freeze Style variants, respectively.

If you’re feeling competitive, there is a no-build Duos tournament happening on Thursday, March 24. This encompasses up to ten matches within a three-hour time period, which varies depending on your region, so make sure to double check this in the in-game Compete tab. If your team places among the top-performing players of your region, you’ll be rewarded with the Chloe Kim Outfit and her back bling ahead of the shop’s debut. Alternatively, earning at least eight points will net you the loading screen. For reference, placing 14th in a match can get you those eight points, as well as eliminating eight other players, so it’s definitely doable. The professional snowboarder became the youngest woman to win an Olympic medal during 2018’s Winter Olympics, following up with the feat of winning two gold medals in halfpipe during the 2022 Beijing Winter Olympics. As part of the Icon Series, she’s joining the likes of music producer’s Marshmello as well as the streamer Ninja, which is a bit dissonant but still unsurprising in Fortnite terms.

All the while, developer Epic games has already raised $50 million USD in humanitarian relief funds to aid the people affected by the war in Ukraine. From March 20 to April 3, all purchases made with real-money (not V-Bucks) are distributed towards the fund. We also have a list of organizations where you can donate directly.