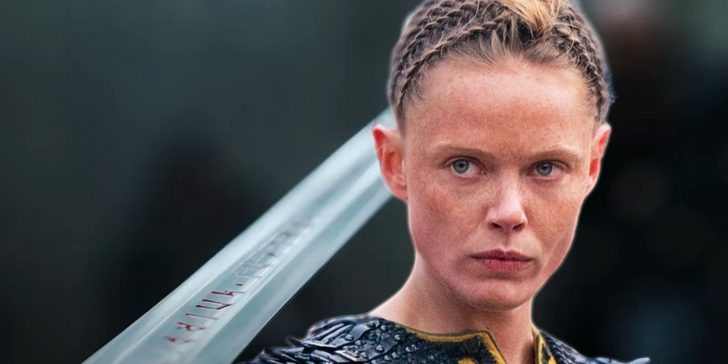 Freydis is gifted a sword by an Uppsala priest in Vikings: Valhalla. That couples with the Seer’s prophecy confirms she has an important role.

Freydis Eriksdotter (Frida Gustavsson) is gifted a special sword in Vikings: Valhalla and the weapon holds an important meaning connected to the Seer’s prophecy in episode 5, “Miracle.” While some characters are having a crisis of faith, the conflict that arises in Valhalla only strengthens Freydis’ belief in the pagan ways. Her faith serves her well, as Freydis’ final showdown with the unwavering Christian Viking, Jarl Kåre (Asbjørn Krogh Nissen), puts her to the ultimate test.

While Freydis’ brother, Leif Eriksson (Sam Corlett), and the rest of King Canute’s (Bradley Freegard) band of loyal Vikings go off to London in retaliation for the St. Brice’s Day Massacre, Freydis is left behind in Kattegat, a Scandinavian stronghold. At the urging of Jarl Haakon (Caroline Henderson), Freydis makes a pilgrimage in order to learn of her destiny and what role she has to play in all of this. Her pilgrimage takes her to the real world Vikings: Valhalla location of Uppsala. Freydis’ journey involves an encounter with the Seer, a character who also made an appearance in Vikings: Valhalla’s predecessor, Vikings, and the receiving of a sword with an inscription on it from an Uppsala priest. The two events are connected, giving further weight to the meaning of each.

Through a ritual that Freydis takes part in at Uppsala, the Seer reveals himself to her, telling Freydis that she is “The Last.” Given that Uppsala is later massacred by Jarl Kåre, it could be foreshadowing that she will be the last one who goes through such a pagan ritual at Uppsala. However, it seems to be even bigger than that. The sword that the priest gives Freydis is engraved with runes, which Vikings: Valhalla’s creator, Jeb Stuart, told Netflix’s companion site, Tudum, translates into: “Keeper of the Faith” (via Netflix). Freydis’ role in the Christianity vs Norse conflict just became a lot more meaningful.

When Jarl Kåre sees Freydis’ new sword, he becomes very interested in it and what the Seer told her. Later on, the Jarl also interacts with the Seer, telling the eyeless man that he, Kåre, has returned “by the power of the One True God—as the sword is carried by the cross.” The Seer appears to be amused by this, noting that even Christians can’t help but to seek him out to find out their destinies. While Kåre’s statement seems to be nothing more than led by blind faith, this very statement will come back to haunt him in Vikings: Valhalla season 1’s last episode.

As Kattegat is under siege by Olaf Haraldsson (Jóhannes Haukur Jóhannesson), Freydis finds herself toe-to-toe with Kåre. After gaining the upper hand, she decapitates him, but not before saying: “The cross that carried the sword was never you. It was my destiny.” It is at this point that Freydis fully realizes what her part in all of this is. She has slain the steadfast Christian and is proving to be Vikings: Valhalla’s most excellent “Keeper of the Faith.”

It appears that Freydis’ real journey in her newfound role is only just beginning. Vikings: Valhalla is expected to release at least two more seasons and so there is plenty of time for the young shieldmaiden to explore her destiny. With Valhalla’s Seer as Vikings’ only returning character in the show so far, it looks like this inclusion was more than just a cameo; the Seer, and for that matter, the sword, hold a huge key to Freydis realizing her full potential.

Next: Vikings: Valhalla – Who The Seer Is & Why Freydis Licks His Hand

Erika St. Denis has often turned to various forms of entertainment throughout her life when she needed a safe place. Her all-time favorite franchise is Star Wars and she can most certainly recite every line from Parks and Recreation. St. Denis loves to write about evergreen content and movies and TV shows that portray LGBTQ+ people positively.