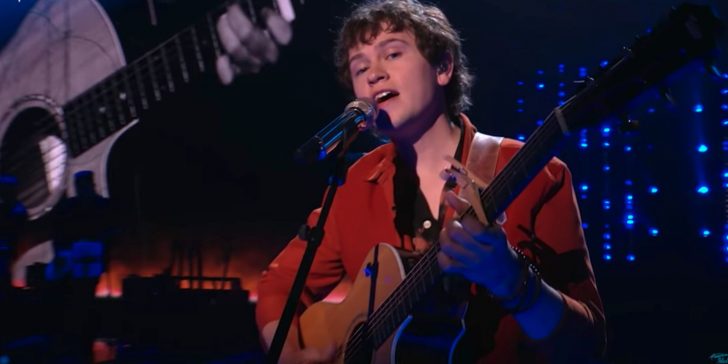 American Idol finalist Fritz Hager was diagnosed with COVID-19, which might cause him to miss the Las Vegas mentoring session with Carrie Underwood.

American Idol season 20 finalist Fritz Hager was diagnosed with COVID-19 and may now miss out on the opportunity to travel to Las Vegas to be mentored by American Idol season 4 winner and country music superstar Carrie Underwood. Throughout the competition, Fritz, a 21-year-old-singer from Tyler, Texas, has continuously stunned judges Katy Perry, Lionel Richie and Luke Bryan with his incredible original songs. He also has an amazing talent for transforming songs with his own unique style, making classics such as “Wonderwall” by Oasis and “Go the Distance” from Disney’s Hercules his own.

Fritz has impressed the American Idol audience so much that his self-titled EP has been climbing the charts, reaching number one on the pop charts. During the American Idol Top 7 round, he was sidelined by COVID-19, along with fellow finalist Noah Thompson, and he could not perform live on the show because he had been diagnosed that morning and had to quarantine in his hotel room. Fortunately, American Idol recorded Fritz’s dress rehearsal, and that footage aired instead. In this episode, Fritz played two of his own original songs. For the TikTok round, he sang his song “All My Friends.” For the Mother’s Day round, he sang an emotional song he wrote at the request of his late grandmother called “The Ocean,” about their family beach house. The judges were blown away by his performances, and America voted Fritz into the Top 5.

During the episode, host Ryan Seacrest announced that the American Idol Top 5 finalists will be traveling to Las Vegas to be mentored by Carrie Underwood, who is currently performing her residency, REFLECTION, at the Resorts World Theatre. In an Instagram Live video titled “Post show celebration (Sick boy),” Fritz admitted that he might not be able to participate in the trip, saying, “I don’t know how Vegas is gonna work. We’ll see. It ultimately depends on if I get better and how quickly I do.” American Idol follows strict COVID-19 protocols, so the decision will be made with an abundance of caution.

Fritz updated his fans about his health, saying, “I’m just trying to get better. It’s mostly just my throat is pretty scratchy and sore and just kind of raw.” He shared that he was taking several medications, drinking tea and trying to get better as fast as he can so that he can be back on the American Idol stage next week. He told his fans that “thoughts and prayers are appreciated.” Fritz admitted that he was “so scared” that he would not be voted through to the Top 5 and that he wished he could have been there to perform live. He also shared that he was grateful that American Idol taped the rehearsals because the show has not been doing that this year. Always thankful for his fans, Fritz expressed his gratitude for all of their support and said they blow his mind each week. He was shocked that over a thousand people joined his Instagram Live. Fritz concluded by saying, “Hopefully next week, I will be back in it, hundred percent. So thank you guys. I love you so much. Bye.”

Hopefully, Fritz will recover from his COVID-19 diagnosis in time to make the trip to Las Vegas with his fellow American Idol season 20 finalists. Even if he cannot travel, he still might be able to get better in time to perform live on stage on Sunday night’s show. If not, he will likely perform from his hotel room. No matter what happens, Fritz’s loyal fans will support him, and he will most likely earn a place in the American Idol finale.

Next: American Idol: All About HunterGirl’s Work With Veterans

Why Fans Are So Curious About Jesse Meester’s Instagram Lately