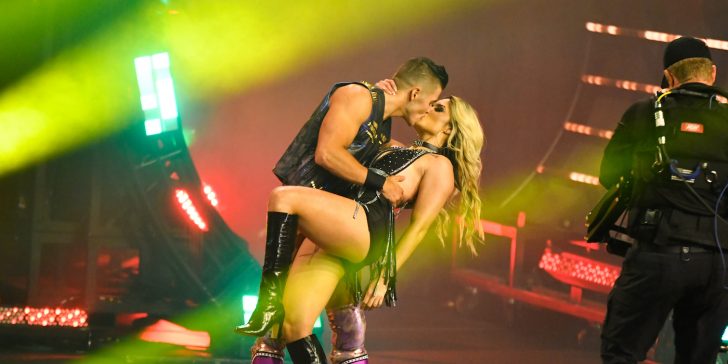 “That thing, that moment, when you kiss someone and everything around becomes hazy and the only thing in focus is you and this person.” – Drew Barrymoore in Never Been Kissed

From Dynamite to TripleMania, wrestling’s newest it couple Sammy Guevara and Tay Conti have obnoxiously swapped spit in tongue-lashing makeout sessions before and after every match. The aggressiveness of their osculation is, I guess, supposed to make you wince. But as Werner Herzog said, “the poet must not avert his eyes.” (Sure, I’m not a poet and he was talking about the spectacle of WrestleMania, but whatever.)

So I leaned in. I slowed the footage down Zapruder-style and studied what makes this kiss so bad. For starters, there’s the obnoxious lean, which seems uncomfortable. Then I noticed Tay licks deep into Sammy’s outer cheek like a dog licking a jar of peanut butter. Then there’s the length. Given the high pressure circumstances, and the out-of-breath nature of sports, there’s a huffing aspect. I began to wonder, is this a bad kiss or a GREAT kiss?

Pro wrestling is a soap opera. Romance has been woven into the complex, ever-shifting, reality-blurring tapestry that has emerged from its brusque carny sideshow roots. While other art forms may have more nuanced tales of love than the squared circle, every once in a while a genuine, beautiful love story can emerge. And the apex of every love story is the kiss. And wrestling has had a lot of bad ones. I decided to take a look at the worst of the worst.

You kinda couldn’t avoid seeing AJ Lee kiss the stars of Raw and SmackDown in the early 2010’s. Part of her character was that she was always playing some sort of psychosexual mind game, that led to her kissing everyone from Primo to Kane. One kiss stands out as particularly rough, however and that is the kiss she shared with actual movie star John Cena.

You can kind of see how not-into-this he was. Maybe E! Network star Nicole Garcia Colace was standing backstage at the Gorilla position monitor, arms crossed, so John went out of his way to make it unsexy. (That certainly sounds like a Total Divas storyline.) But that’s no excuse for the technique here. AJ is a pro, and goes for the intense kiss. John … reminds me of …

One time I worked with an actress on a short film, who shall not be named. Between takes, she mentioned offhand that she doesn’t drink water. Can’t stand the taste. However, the script called for her to take a sip of water from a cup. I watched multiple takes of her trying to pretend to be ok with it. The way she puckered her lips and let water in her mouth only to let it dribble out back into the cup is exactly what John looks like here. It’s horrible. This was never followed up and led to nothing.

Babu vs. A Fan

Okay, this is just bad in not a fun way. I didn’t think my rating of “how bad of a kiss is this” would have a racism element, but here we are.

Tiger Ali Singh was one of the Attitude Era’s more forgettable heels. Basically a Million Dollar Man re-hash, Tiger’s Virgil was a shivering, semi-feral racist cariacature of an Indian peasant, named [extended sigh], Babu. I hate this so much.

Tiger offers an audience member $600 American dollars to kiss Babu. He didn’t brush his teeth and has been eating sardines for days. A woman enters the ring, as Tiger announces with a deficit of charisma, “LET THE TONGUE KISSING COMMENCE!” This woman kisses Babu who just kinda takes it. Then, The Undertaker and Kane come out. It’s weird and bad and the kind of thing that makes me embarassed to like wrestling in general even though I really hated this. This was never followed up and led to nothing.

Ugh, ok, so Stephanie and Eric were the General Managers of SmackDown and Raw, respectively, and were business rivals competing to sign free agents. Stephanie is pulled from the Smackdown Halloween party to her office to see Eric wearing a Vince McMahon mask (and like, a zoot suit) to boast about his imminent signing of the Big Bad Booty Daddy. Stephanie goes to slap him, but he stops her, and aggressively kisses her. After a struggle, the kiss becomes passionate and they wind up on top of each other on a desk.

This ranks because it forces me to think of Eric Bischoff as a sexual person, and you know the whole Stephanie kissing her father thing. In fact it wasn’t the first or second time she kissed Vince on TV, and we all remember the incest storyline. This was never followed up and led to nothing.

“This video may be inappropriate for some users,” warned YouTube as I clicked through. I remember this storyline from 2001 well. Linda McMahon had been the ultimate spoiler for Vince’s nefarious plans for some time now. Vince’s solution? To drug his wife of two decades, leaving her in a catatonic state as he did his villain thing. However, things got worse when he began flaunting his new goomah, Trish Stratus. While many look to her stripping and barking like a dog for Vince as a real low-light of this era (and it was), I’d argue that this was the greater indignity.

Like an apex predator, he hovers his toothy mouth agape over hers, then suctions on like a sea lamprey. Their kiss turns away from camera–the eye of the storm–then returns with a darting Trish-tongue. The camera then cuts to a lifeless Linda. Maybe, on paper, this is a “great” kiss. Trish is a champ for committing. But it’s Vince McMahon. And that is disgusting.

Again, this is Vince McMahon. While it was sadly a rite of passage for every WWE Diva to kiss their gross fucking boss, none of them had to do it on their very first night with the company, except for Torrie Wilson. The context here being she was setting him up for Vince by Linda only makes it more icky.

This kiss regrettably begins with Vince’s steak wrap breath whispering a Rocket Raccoon-style “yeahh” directly into Torrie’s gaping mouth. He then suctions on again, this time attaching his gross mouth to the 26-year-old’s chin. She stops, as his lips drag upon her face, to make a comment about his strong cologne, a true attack on all senses. I hate this. This was never followed up and led to nothing.