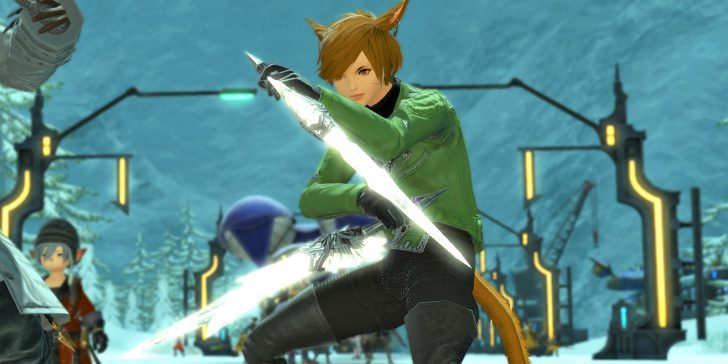 The next big Final Fantasy XIV update is imminent, and the FFXIV team has released the full 6.1 patch notes outlining all of its new content. This includes all the FFXIV 6.1 Job changes. There is a lot that has been tweaked whether you play tank, DPS, or healer. Jobs like Samurai, Ninja, White Mage, Paladin, and Dancer got some significant adjustments that you’ll want to account for before jumping back into action. Here, we have summaries highlighting what’s new for each role and breakdowns for each of the Job changes in Patch 6.1.

The game is currently offline for maintenance as we wait for FFXIV Patch 6.1 to go live on April 12 at 3:00 a.m. PT. In the meantime, be sure to check out our roundup of everything important coming to FFXIV Patch 6.1, all the new mounts and minions, and what’s good with the Myths of the Realm Aglaia 24-player alliance raid.

Every tank gets a meaningful change in FFXIV Patch 6.1, except for Gunbreaker. Paladin’s Blade combo is now subject Requiescat instead of Confiteor, which may take some getting used to — that Blade combo also gets some neat healing effects. As anticipated, Dark Knight’s Living Dead has been overhauled now granting HP restoration with attacks and a new effect called Undead Rebirth. Warriors may rejoice with Overpower now being a regular AoE instead of cone AoE.

Iron Will recast time has been reduced to 3 seconds down from 10 seconds.
Clemency, Holy Spirit, or Holy Circle no longer interrupts combos.
Requiescat now grants an additional effect called “Blade of Faith Ready” for a duration of 30 seconds after Requiescat expires.
Blade of Faith is no longer a combo action with Confiteor (now subject to Requiescat expiring).
Confiteor, Blade of Faith, Blade of Truth, and Blade of Valor all now have an additional effect that restores your own HP with 400 cure potency.
Divine Magic Mastery II: Now adds a healing effect to Confiteor.

Defiance recast timer has been reduced to 3 seconds down from 10 seconds.
Overpower has changed to a point-blank AoE on all nearby enemies instead of a frontal cone AoE.
Inner Release stacks now only apply to Fell Cleave and Decimate. While its status debuff nullification effects have not changed, you may notice the description has changed and the effects grouped under the “Inner Strength” moniker.

Grit recast time has been reduced to 3 seconds down from 10 seconds.
Flood of Darkness potency has been reduced from 130 to 100.
Blood Weapon now grants five (5) stacks of the Blood Weapon effect, and the effect duration now lasts 15 seconds up from 10 seconds.
Living Dead now restores HP with each successful weaponskill or spell landed with a 1,500 cure potency.
Undead Rebirth is a new effect. If you are healed to max HP before the Walking Dead timer expires, Undead Rebirth will be granted for the remaining duration that Walking Dead was supposed to go for. While under Undead Rebirth, most attacks will not knock you below 1 HP.
Stalwart Soul: Now acquired at level 40 (previously level 72).

Royal Guard recast timer reduced to 3 seconds down from 10 seconds.

The big story with melee DPS Job in FFXIV Patch 6.1 is the overhaul to Samurai. The guaranteed critical hits on certain actions and sweeping potency changes are sure to shake things up for the Job, but Samurai mains will pour one out for Hissatsu: Kaiten. Ninja also has some very notable changes, particularly with Mug taking up Trick Attack’s old function. Trick Attack still serves a purpose, but us Ninja mains will have to rewire our brains with Mug being our go-to utility now. Dragoon and Reaper players will notice smoother gameplay with the quickening of certain actions subject to animation lock.

Perfect Balance can no longer be executed while under the effect of any Beast Chakra.

There are some straight-forward changes for Machinist, which sees several potency increases. And while Summoner’s roster of Ruby-based spells now have longer recast timers, they all get notable potency increases (and Bunky is now longer required for Searing Light). The major thing to note here with Dancer is the recategorization of several abilities and a renaming of its procs.

The main thing when it comes to healers in Patch 6.1 is the reduction of MP costs for several core spells. White Mage gets the most changes with some potency adjustments and tweaks to its high-level abilities. Scholars got the last laugh with their level 90 sprinting spell, but the fun has been reigned in with a duration reduction. And all the new Sage mains should be happy with the recharges to the Addersting Gauge when entering instances.

Ruin, Bio, and Bio II now cost 300 MP instead of 400 MP.
Sacred Soil has an increased area-of-effect radius to 10 yalms instead of 8 yalms.
Embrace has an increased range for targeting party members.
Expedient now only grants 10 seconds of Expedience effect instead of 20 seconds.

Combust now inflicts 30 seconds of damage-over-time instead of 18 seconds.

Dosis now costs 300 MP instead of 400 MP.
Soteria now grants four (4) stacks of its effect. The effect potency has increased to 70% instead of 50%.
Full Addersting stacks granted when entering an instance or restarting an instanced battle.

Good lord, those are a ton of changes for Jobs in FFXIV Patch 6.1! Make sure you study up on how your Job has changed before jumping into the new Myths of the Realm alliance raid or continuing MSQ with that new mysterious dungeon the FFXIV team won’t tell us about.