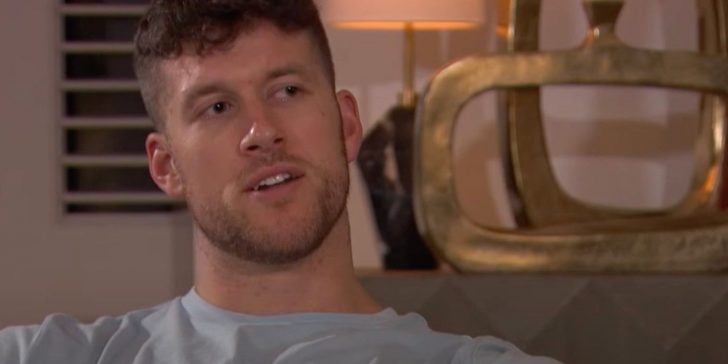 The Bachelor’s Clayton is scheduled to visit the hometowns of the four remaining women this week and Gabby’s grandpa doesn’t like what he sees.

A sneak peek of this week’s episode of The Bachelor shows Clayton arriving at Gabby’s house to meet her family and her grandfather is not impressed with his granddaughter’s suitor. This is the week that Clayton is scheduled to go to the hometowns of each of the four women who are still in the running for his final rose. Rachel, Susie and Serene are also slated for hometown visits.

Last week’s episode was full of drama and surprise eliminations. During “therapy sessions” with a psychoanalyst in Austria, all of the women on the group date attempted to go deeper with Clayton in order to move their relationships forward. Several of them made progress, but everyone was thrown for a loop when the therapist announced that one of the women was being “performative.” A deeper dive into the accusation had Clayton discovering that Sarah, (who looked to be a front-runner for several weeks) was the woman in question. After engaging in some detective work with the other women, Clayton became convinced that he couldn’t trust Sarah and sent her home.

Related: Why The Bachelor Should Stop Doing Forced Therapy On Group Dates

Entertainment Weekly shared a sneak peek of Gabby’s hometown visit and her grandfather is clearly not as enamored with Clayton as his granddaughter appears to be. In a private moment, Gabby asks his opinion and assures him that he can be honest. His assessment seems to come as a shock to her when he states, “I think he’s full of s**t. All I have to say is make sure before you make that final step.” The following scene has Gabby in tears, presumably a response to her grandpa’s comments.

Clayton has had a rough journey so far, with several messy break-ups in his wake. Cassidy and Shanae had the entire house against them for weeks before Clayton caught on to their shenanigans and his break-up with Sarah came only after he investigated her antics and came to the conclusion that she couldn’t be trusted. Genevieve, who couldn’t open up during the therapy session was walked out last week, only to be followed by Teddi, who had been an early favorite and had even received the first impression rose.

Clayton came across as a good guy when he appeared on Michelle Young’s season of The Bachelorette, making him a likely candidate for The Bachelor. While he hasn’t done anything that could be considered offensive in his current role, fans are wondering why he’s so slow to pick up on some of the women’s polarizing personalities. Calling fellow housemates out for “not being here for the right reasons,” is uttered like clockwork by contestants this season, and fans are questioning why some of the more manipulative women have gotten so far with Clayton when they’re truly just starting fights among the women week to week. Gabby’s grandpa might be wrong about Clayton being inauthentic, but he’s not wrong when it comes to seeing that the guy is having a rough time leading the show.

Next: The Bachelor: Is Clayton Echard Just Too Nice To Be A Fun Leading Man?