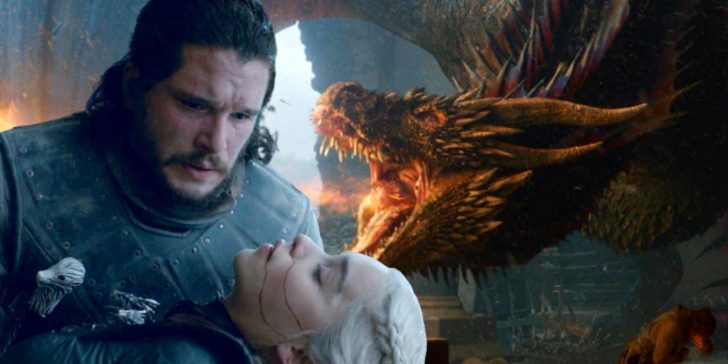 Jon Snow murdered Daenerys Targaryen in Game of Thrones’ ending, so why didn’t her faithful dragon Drogon attack John in retaliation? Game of Thrones’ ending proved to be extremely controversial, and the Dragon Queen’s arc, leading to Daenerys’ death, was a major reason for that. Having been built up as one of the two main heroes, Game of Thrones turned Daenerys into the “Mad Queen” in its concluding episodes, a dark turn that was largely criticized for how it was written.

The culmination of this was Dany’s shocking destruction of King’s Landing where, atop Game of Thrones’ Drogon, she burned much of the city to the ground, killing countless innocents in her pursuit of both power and revenge on Cersei Lannister. Unfortunately, it was all for naught; in the end, Game of Thrones’ Mad Queen Daenerys Targaryen never even got to sit on the Iron Throne. Just as she was about to get what she’d wanted for so long, in Game of Thrones’ ending episode, “The Iron Throne,” Jon Snow realized the dangerous tyrant she’d become and subsequently murdered her.

Throughout Game of Thrones, Daenerys shows acute control over her dragons and they are used for her wrath and her wrath alone. After Daenerys’ death, it would only seem natural that Game of Thrones’ Drogon would bear his protective teeth and burn Jon Snow to a crisp. However, audiences know good and well that didn’t happen. Instead, Drogon lets out a cry of anguish and then burns the Iron Throne down to the steps. Drogon picks up Daenerys and carries her body off to the East. So why didn’t Drogon kill Jon Snow in Game of Thrones’ ending?

There’s no rule that says dragons won’t kill Targaryens — dragons attacked other dragons countless times during the Targaryen Civil War known as The Dance of the Dragons, which will be chronicled in the Game of Thrones spinoff series House of the Dragon. But Jon Snow’s blood and, more importantly, his connection to Daenerys and Drogon was likely a factor in his survival. Game of Thrones’ Drogon not only knew that she and Jon were in love, prior to Daenerys’ death, but he himself trusted Jon Snow completely, as shown by letting his guard down in front of him on Dragonstone. Even if Drogon knows Jon killed Daenerys despite being her lover, it’s obvious from the circumstances it was not something done out of malice; there’s no celebration or sense of victory from Jon Snow.

Game of Thrones’ Drogon apparently senses that Daenerys has died, and there’s a strong link between them — hence how he knew to come to her rescue in Meereen’s fighting pit too — and so that suggests he understands, on some level, what has happened, why Jon Snow did what he did, and why he won’t kill him for it. If that’s giving Drogon too much credit — though dragons are intelligent, complex creatures — then it can also be looked at from the point of view that, more simply and plainly, he trusts Jon, and has no cause to harm him. In fact, in Game of Thrones Daenery’s dragons had immense trust in Jon Snow. In Game of Thrones season 7, episode 5, “Eastwatch,” Jon Snow manages to pet Drogon without being killed via burning to a crisp. Jon Snow was even able to ride Rhaegal, something that Game of Thrones’ Drogon wouldn’t let him do without serious trust.

Upon discovery of Daenerys’ death, Game of Thrones’ Drogon let out all of his anguish and fury in an incredible burst of fire. But while many might have thought he’d target Jon Snow — including Jon himself, who seemingly expects to be attacked, with the episode’s script noting that he “prepares to die” — Drogon turns his fiery gaze upon the Iron Throne instead, melting it down. Even though Jon Snow was the killer, Drogon doesn’t choose to murder him in return, for a few different reasons. It’s unclear if Drogon realizes that Jon is responsible for Daenerys’ death, but he’s the only other person there, after all, so it seems likely. However, the dragon also seemingly knows that Jon, ultimately, isn’t to blame for Daenerys’ death and that he’s a person his mother loved. Drogon, the finale’s script notes, “wants to burn the world, but he will not kill Jon.”

Related: House Of The Dragon Can Answer A Major Jon Snow Warg Question

Whether Game of Thrones’ Drogon really did know what the Iron Throne represented or not is another matter — the script suggests not, stating it’s “not the target of Drogon’s wrath”; the DVD commentary for “The Iron Throne” contradicts this, with David Benioff saying: “If [Dany is] not going to sit on it, no one’s going to sit on it.” The latter feels more likely and less like a simplistic take because Game of Thrones’ Drogon was so connected to her and even mourned Daenerys’ death, and so knew at least some of her thoughts and emotions in a way. Because of that, he would have known that she loved Jon Snow until the very end and that she had been corrupted by the seat of power, and so Jon Snow didn’t deserve to die for killing her in Game of Thrones’ ending.

Next: Game of Thrones: How All The Targaryen Dragons Died (Before Daenerys)

The Boys: Why Butcher & Hughie Look So Different In Diabolical