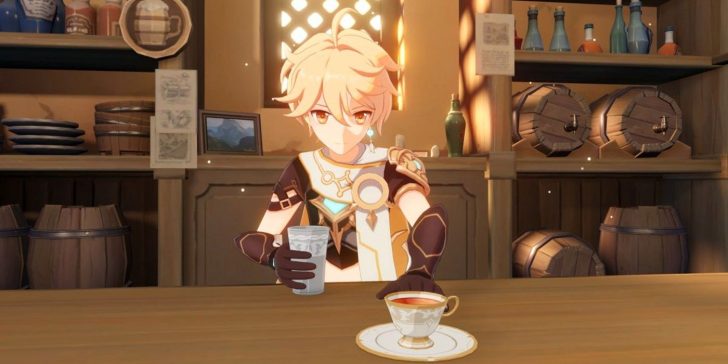 The “Of Drink A-Dreaming” event has just been announced, and it will apparently see Genshin Impact players slinging drinks to various characters.

A new Genshin Impact update is on its way, and this time it aims to turn some of the game’s many players into bartenders. The world-famous free-to-play RPG is sustained by its live-service elements and various in-game events alongside the release of new playable characters added to Genshin Impact.

As is the case with so many other live-service games, Genshin Impact regularly serves up fresh content and activities for its players. Thanks to its status as an open-world MMO, these updates typically offer limited-time events for players to complete, with the rewards being special gear, weapons, or buffs. Leaks can shed additional light on content drops, like the highly-anticipated Chasm region and unlockable characters such as Yelan and Ayato. On the events side of things, players recently engaged with the Three Realms Gateway event, which yielded a bevy of unique rewards and refining materials for rare gear pieces. Updates like these can also usher in new features like the custom domains coming with Genshin Impact’s Divine Ingenuity update.

This March will see the release of Genshin Impact’s “Of Drink A-Dreaming” event, which shakes things up even further with new content and activities. According to a post on the HoYoLAB forums, this event will be themed around tavern culture and drinking, with players assuming the role of a bartender and playing a drink-making minigame. Through this minigame, players will be tasked with concocting specialized drinks for a number of the game’s NPCs. As the event goes on, new drink recipes will be unlocked. Upon reaching a score requirement, participants will earn an assortment of rewards, including a “Celebration: Binge Vessel” name card, exclusive furnishings, and various materials. The event will run from March 10 to March 21, with an additional “Of Drink A-Dreaming: Afterword” quest being made available from March 21 to March 24.

Taking part in these events can be important, especially for those attempting to level up their Genshin Impact characters. While this upcoming questline seems to be taking a much more relaxed and casual approach than some of the more action-oriented ones, it will still be offering valuable collectibles such as Primogems and Weapon Ascension Materials. These collectibles can play a major part in progression, so obtaining them through a low-stakes activity like this one will be a boon for many.

As time goes on, it will be interesting to see what other in-game events Genshin Impact has planned. These sorts of limited-time activities are multitudinous and robust, and it’s still early in the year. Hopefully, Genshin Impact fans will be satisfied with their time as bartenders during this event – as well as whatever future events may be on the horizon.