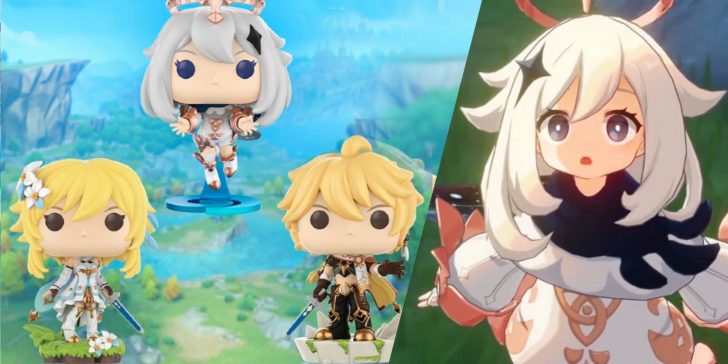 Funko has officially revealed the first Genshin Impact Funko Pops, which include Aether, Lumine, and Paimon, complete with accessories and weapons.

Fans of Genshin Impact will soon be able to get their hands on a range of characters from the beloved RPG in the form of Funko Pops, based on Paimon, Aether, and Lumine. This is far from the first time Funko has released Pop collectibles based on video games, with just a few of the brand’s previous releases including Overwatch, The Witcher 3: Wild Hunt, and Five Nights at Freddy’s. There are countless Funko gaming Pops on the market, and last year the toy brand even released its own Gamestop icons series with Pops based on Halo’s Master Chief, Sonic the Hedgehog, Sly Cooper, and more.

As one of the biggest games of the last few years, Genshin Impact has millions of players across the world, many of whom are interesting in collecting merchandise related to their favorite characters and locations. Figures are especially sought-after, with high-end collectible figure brands like Good Smile Company releasing stunning and game-accurate figurines of Genshin Impact’s many fighters. While these are impressive pieces for any serious collector, they’re often expensive, and can even retail for up to around $200. Last year, Good Smile Company and manufacturer Wonderful Works opened pre-orders for a highly-desirable and impressively detailed Genshin Impact Mona figure, with an RRP of $193.99.

Genshin Impact fans with a smaller budget for their collectibles might have better luck with the newly-announced line of Funko Pops, which have officially been revealed by Funko on Twitter. The line will consist of three Funko Pop figures – Aether, Lumine, and Paimon – each retailing for $12. As expected, the characters have received the full Pop treatment, with large heads and minimalistic face detailing. Unlike typical Pops though, the figures appear to include bases, with additional details including weapons and even a crown for Paimon. Those interested in picking up the Genshin Impact Pops can sign up to be notified of their release through the official Funko website.

Funko isn’t just releasing more gaming-related Pops with its new Genshin Impact line, it’s also releasing more board games. Funko Games recently announced a board game based on A Goofy Movie, along with a host of other Disney-related games including Disney Happiest Day Game – Magic Kingdom Park Edition and Disney Big Thunder Mountain Railroad Game. Fans of Funko and its many products shouldn’t be short of new video game and board game-related releases throughout the rest of 2022, whether collecting figures or looking for a new family-friendly adventure.

Fans of Genshin Impact have been hoping for new figures for a while, and the news of Paimon, Aether, and Lumine Funko Pops will likely please many players of the game. Funko hasn’t shared just how hard these figures may be to acquire, but the range doesn’t appear to include any chase or special variants at this time. As with lots of other Pop releases, further additions to the core series are always possible in the future, and if the figures prove popular, fans could soon be seeing other fan-favorite Genshin Impact characters join the line-up.

Next: New E.T. The Extra-Terrestrial Board Game Coming From Funko