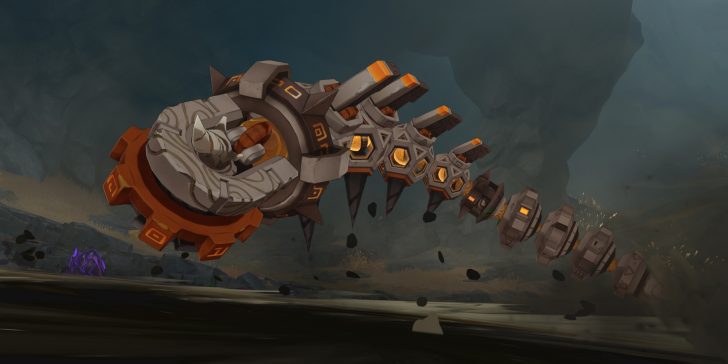 A massive blubber-summoning Ruin Guard in snake form is being thrown at you in Genshin Impact Version 2.6. Once you’re equipped with a shiny new Lumenstone Adjuvant, you’re ready to traverse the tunnels and face the brand-new underground Boss inside The Chasm.

Perhaps you’re wondering how to defeat the Ruin Serpent and its Oozing Concretions. Or perhaps (and this is honestly half the challenge) you haven’t been able to find the snaky foe yet. Or, also very possible, you’ve just obtained a Runic Fang and you don’t know what to do with it. Whatever the case, here’s a full Genshin Impact Ruin Serpent Boss guide to help you out.

How to Find the Ruin Serpent in The Chasm

The Ruin Serpent is located in the Underground Mines region of The Chasm. There are a few steps to take before you’re able to enter The Serpent’s Cave:

First, make sure you have completed the “A New Star Approaches” Archon Quest in Liyue. You also need to do Xingqiu’s Story Quest.
Go to the area above The Chasm and speak to Muning to start the World Quest called “The Chasm Delvers.”
Continue questing until you unlock the part of the map where the Ruin Serpent’s Cave is located.

If you continue down the tunnel after completing First Miasmic Contact, you can already reach the Ruin Serpent. However, it’s better not to fight it without an upgraded Lumenstone Adjuvant. The combat gets easier if you wait until you’ve at least completed The Heavenly Stone’s Debris.

The Ruin Serpent isn’t the hardest Genshin Impact Boss to defeat, but there are a few important things to keep in mind:

The Ruin Serpent has a high Physical Resistance, so unleash your most devastating Elemental Attacks on it instead.
You can stun the Ruin Serpent by destroying all Oozing Concretions. It’s very easy to finish the boss off in this state, so always go for destroying the purple blobs if you’re able.
Destroy the ore spawns (yellow stones) to regain Lumenstone Adjuvant Energy. If your Lumenstone Adjuvant has received less than three upgrades, you always need to recharge during battle in order to defeat the Oozing Concretions.
Be careful: stepping on the purple liquid will drain the Lumenstone’s Energy.

As mentioned before, the Ruin Serpent is highly resistant against Physical Damage, so leave characters like Eula at home. Any strong Elemental Damage dealer works fine though, so creating a good team should be easy. Here are a few more tips:

Bring a Catalyst wielder such as Sucrose or Klee to be able to trigger Elemental Reactions at all times.
The Ruin Serpent has a lot of range. Bringing a strong shield provider like Thoma, Diona, or Zhongli. Doing so saves you a lot of trouble.
Since you still need to keep some distance, an ranged Elemental DPS like Ganyu or Yoimiya is extremely handy.

We didn’t come all this way just to look at the Ruin Serpent, did we? Here’s the complete list of Ruin Serpent Boss rewards:

As usual, it costs 40 Original Resin to collect the rewards. The Ruin Serpent respawns one minute after defeat (you may have to teleport again).

To take down this Boss as quickly as possible, it’s helpful to know its attacks. Note that they’re either Physical Attacks, or Physical mixed with Oozing Concretions (the purple liquid). Here’s an overview:

Oozing Concretions Attack: The Ruin Serpent dives underground, then summons four Oozing Concretions to the battlefield. Use your Lumenstone Adjuvant (Blooming Light) to destroy them.
Shockwave: When you see sparks flying towards the Ruin Serpent, you know this one’s incoming. The shockwave has a large AoE, but it’s slow enough to avoid.
Shock Bomb: Similar to the shockwave, but with a far slower charging time. It drops bombs all around the battlefield, so be ready to dodge.
AoE Vortex Attack: The Serpent creates a whirlpool of sand that will draw the player to its center. Keep your distance when the Serpent dives underground.
Charge Attack: The Ruin Serpent rises up for a moment, then slithers towards you.
Double Swipe Attack: A forwards slam, followed by a swipe/roll to the left, and then back again to the right.