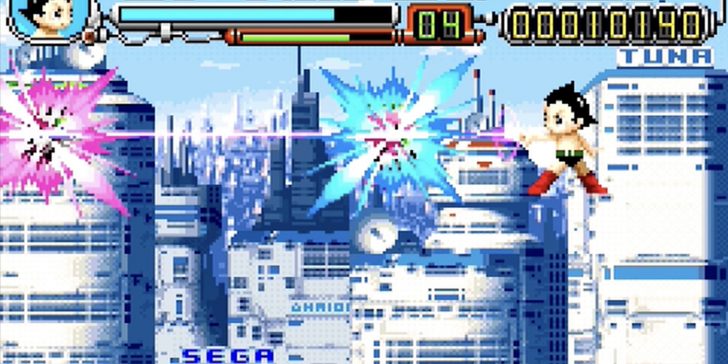 I don’t know anything about Astro Boy. I barely know anything about its creator, Osamu Tezuka — aside from the fact that he drew a really sexy mouse one time. But I do know Treasure, co-developers (along with the now-defunct Hitmaker/Sega AM3) of Astro Boy: Omega Factor on the Game Boy Advance, as well as some of my favorite games of all time, like Gunstar Heroes and Mischief Makers. So, as I’ve been scrolling through the libraries of retro games on my Anbernic handheld, I made a note to check out Omega Factor. And I’m glad I did, because it’s a charming, frenetic little game that deserves a wider audience.

Released back in 2003 after the Astro Boy anime reboot, Omega Factor follows the titular Astro Boy, a superpowered robot living in a world full of wacky characters and riven by conflict between humans and machines. It doesn’t follow any one particular Astro Boy story, instead assembling elements from a number of them to create a loose narrative that makes room for dozens of colorful Tezuka characters. I didn’t find it too hard to follow despite not knowing who any of them were, either — the characters and story elements here are goofy enough that my lack of familiarity didn’t really impact my enjoyment of them.

The game itself is a 2D beat-em-up, where Astro moves from area to area, getting locked into a screen while enemies pile in and moving on when he’s dispatched them all. Your actions are fairly limited, consisting of a simple punching combo, a kick that blasts enemies away, an invincible air dash, and a finger laser. You also get a number of “super” attacks, which include a butt-mounted machine gun that hits everything onscreen, and a huge arm cannon that blasts everything in front of you but leaves you vulnerable. There’s no acquisition of new abilities or weapons, aside from a system that lets you upgrade your health and the damage of your abilities as you meet and come to learn about more and more people, but as a Treasure game the core actions feel so good and can be chained in such creative ways that it doesn’t matter.

Omega Factor‘s narrative perfectly interweaves with its gameplay. At the outset, you’re fighting goofy-looking robots and the story is relatively lighthearted. A few levels in, and you’re dealing with anti-robot fanatics, genocidal psychic warlords, and an apocalyptic space station scouring the Earth of robotic life, all of which are appropriately tougher than the earlier slapstick goons. Oh, and then Astro dies and the game completely changes. I won’t say any more than that, but it was certainly an unexpected turn of events.

Mostly overlooked due to the reputation of licensed games back when it was released, Omega Factor deserves a second chance. It’s a fast-paced, gorgeous-looking game by a developer with serious pedigree, recalling Capcom’s licensed Disney games from the NES and SNES eras. Sadly, it’s unlikely to be rereleased today due to the vagaries of licensing, so you’ll have to play it any way you can.