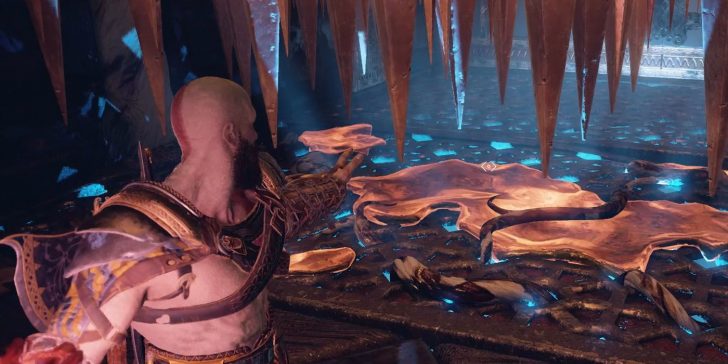 A God Of War (2018) player accidentally stumbles into a trap and leads Kratos to an untimely demise while trying to parry an oncoming attack.

The world of God Of War (2018) is filled with many dangerous enemies and environmental hazards, but one unlucky player was accidentally crushed to death by a trap while locked in a heated battle with some low-level foes. Just like in the original God Of War trilogy and its many spin-offs, Kratos and his son Atreus can explore many ancient structures in Sony Santa Monica’s 2018 reboot – all filled with various traps meant to ward off any would-be intruders and spell a quick and bloody end to the former Ghost of Sparta.

One major difference in God Of War (2018) is the combat system Kratos utilizes while exploring these forbidden areas, which replaces the flashy moves and over-the-top quick-time-events from Kratos’s time in ancient Greece with more up-close-and-personal combat that utilizes blocks and parries in addition to brutal strikes and even ranged attacks from the new Leviathan Axe Kratos wields in God Of War. While these new battle mechanics highlight how Kratos has changed and evolved in the centuries since his revolt against the Greek pantheon in the original God Of War games, it can also lead to some sudden and accidental deaths if the Ghost Of Sparta makes a wrong step while dodging or blocking an oncoming enemy attack.

Reddit user NO84MADD recently had the misfortune of accidentally falling prey to a trap during a recent round of God Of War (2018), as reported by Game Rant. In a video clip posted to r/GodOfWar, Kratos faces off against a pack of draugrs inside a dark and foreboding hallway. Said hallway is guarded by a series of retracting walls with spikes attached to skewer anyone foolish enough to stand underneath them, a detail that soon spells disaster for Kratos as he tries to fend off his undead foes. While the ax-and-shield-wielding God Of War defeats the first draugr without much difficulty, an ill-timed parry against the second one inadvertently places him right in the path of the spikes as they descend – crushing Kratos and causing an instant game over for NO84MADD. NO84MADD’s edited clip then cuts to a scene from Parks and Recreation in which Ron Swanson throws his computer away in disgust, no doubt reflecting the player’s frustration at their sudden and avoidable death in God Of War (2018).

God Of War fans are currently looking forward to returning to Sony Santa Monica’s brutal take on Nordic mythology in the next God Of War game, which is currently set to be released sometime later this year, despite many players speculating that God Of War Ragnarök might be delayed into 2023. In the meantime, the first installment of Kratos’s two-part Norse saga was finally brought to PC through outlets like Steam and the Epic Games Store back in January and quickly built up a player count rivaling PC ports of other previously PlayStation-exclusive titles like Days Gone and Horizon: Zero Dawn.

This new port has naturally led to an influx of new God Of War fans, as well as humorous mods and gameplay videos of players journeying through Kratos’s latest tale of revenge and regret. However, while the Ghost of Sparta has faced off against plenty of formidable foes and legendary beasts throughout God Of War (2018), sometimes his greatest threats come from his own mistakes – like accidentally stumbling into a death trap after successfully fending off a draugr.

Next: Why God Of War Games Make A Movie Unlikely