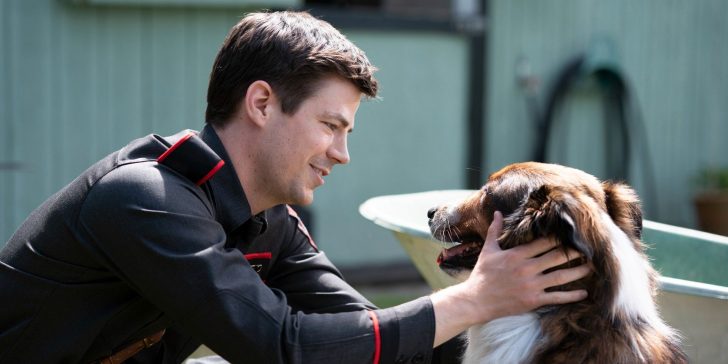 Rescued by Ruby﻿ isn’t exactly a perfect or deep movie, but it is bound to draw smiles and tears from anyone who has cuddled with a dog of their own.

Is it possible to make a bad dog movie? When there is a cute puppy onscreen, it can be hard to outright reject a film, even if it holds some flaws. Such is the case with Netflix’s Rescued by Ruby, a true life tale that is bursting with so much affection for the canine at its center that viewers might be tempted to adopt one of their own. Directed by Katt Shea and led by an earnest performance from Grant Gustin, Rescued by Ruby is very much the definition of a crowd-pleaser. The only things bogging it down are a surface-level scope and a tendency to rely too much on on-the-nose sentimentality. Rescued by Ruby isn’t exactly a perfect or deep movie, but it is bound to draw smiles and tears from anyone who has cuddled with a dog of their own.

Rhode Island state trooper Dan O’Neil (Gustin) has one dream in life — to join the prestigious K9 unit. Year after year, he’s applied to the local program, which is run by blunt, but supportive Matt Zarella (Scott Wolf), only to be rejected every time. After numerous fruitless attempts, Dan makes some major progress by adopting Ruby, an eager pup from the animal shelter who has yet to connect with a family. That would be because she doesn’t listen to commands, gleefully destroys anything in her path, and drives everyone but the animal shelter’s employees crazy. Dan is determined to train Ruby and turn her into a viable candidate for the K9 team, but to say he has his work cut out for him would be putting it lightly.

Scott Wolf in Rescued by Ruby

Rescued by Ruby is indeed based on a true story, as well as the short stories “Ruby: A Dogwink Story” and “Dogwink Ruby” by Squire Rushnell and Louise DuArt, who both serve as executive producers. The script, meanwhile, was penned by Karen Janszen. Just based on the premise, it won’t take much difficulty to figure out where Rescued by Ruby is going. There’s a predictability to Janszen’s story, but it isn’t without satisfaction. Even when knowing exactly what is going to happen, the journey still feels worth it. Ruby is played by two dogs named Bear and Shiloh, and both flawlessly carry out the required stunts and emotional beats. It must’ve come with a lot of work behind the scenes; some adorable bloopers in the Rescued by Ruby credits show the trials and tribulations that can come with working with animals (and babies, for that matter, as Dan is a new father).

Shea’s smartest creative touch is the decision to spotlight Ruby’s own viewpoint. Occasionally, the camera shifts to be Ruby’s eyes, giving viewers an inside peek at what the eager dog is seeing. In these moments, when Gustin fills the entire screen, it really highlights how a human companion can become a dog’s entire world. In regards to that human companion, Gustin is game to go toe-to-toe with the energetic Ruby. He sports a Boston accent that actually isn’t terrible and skillfully conveys Dan’s determination to join the K9 unit. Seeing as Janszen’s script doesn’t give much explanation for why he wishes to join so much, the audience’s investment in Dan’s journey rests squarely on the actor’s shoulders. Still, he makes the young family man someone to root for. Kaylah Zander, as Dan’s extremely understanding wife Melissa, brings a warmth to Rescued by Ruby that actually subverts some tropes when one might’ve expected her to clash with the messy dog suddenly thrust upon her home.

Grant Gustin and Kaylah Zander in Rescued by Ruby

Where Rescued by Ruby falters is in its depth and slight reliance on the melodramatic. The former ties back to the script not giving much explanation for Dan’s goals; the movie itself only scratches the surface of some of the narrative hurdles it presents. Dan’s self-confidence issues are highlighted the most, but there’s still a glossy sheen over all the potential conflicts. For a movie as heartwarming as Rescued by Ruby, that might not be a bad thing, but one does wish it sought deeper layers. As for the latter, Shea does give into the urge to play up the dramatic. One dark twist (or as dark as this film gets) leads to an interlude that stretches on for longer than necessary, purely to drum up suspense that never really amounts to anything. Rescued by Ruby also sneaks in a surprise reveal at the very end that feels a bit contrived, but also does inspire some tears (so perhaps it actually is a good little surprise).

All told, Rescued by Ruby is perhaps not the most revolutionary dog movie audiences are likely to find, but it will certainly do the trick if one is looking for something sweet and inspiring. With little real drama and plenty of adorable puppy shots, Shea’s film goes down easy. A scope that moves beyond surface-level might’ve been nice, but sometimes it isn’t incredibly necessary. A good girl like Ruby is sometimes enough to entertain.

Rescued by Ruby is now streaming on Netflix. It is 93 minutes long and rated TV-G for fear and language.