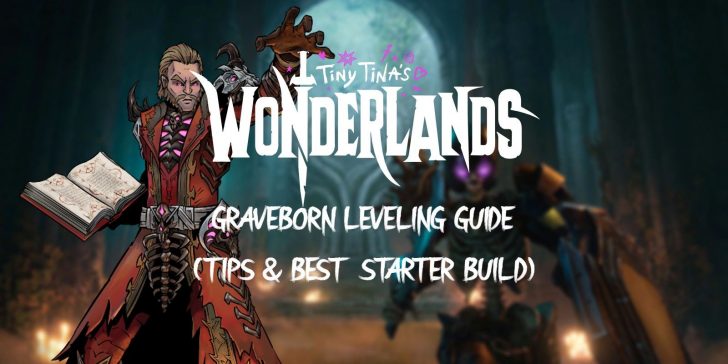 In the early parts of Tiny Tina’s Wonderlands, the Graveborn has one of the easiest and most versatile leveling experiences compared to other classes.

When it comes to the early game of Tiny Tina’s Wonderlands, the game holds fast to its RPG roots in terms of the requirements for better gear. Unfortunately for players, the cons of Tiny Tina’s Wonderlands’ loot n’ shoot gameplay surface in the player’s equipment. Players will quickly out-level all of their starting gear very early into their adventure. On the other hand, Class Active Skills are a permanent source of consistent gameplay and damage throughout the player’s journey to level 40. For the Graveborn, their initial Active Skill ‘Dire Sacrifice’ is disgustingly overpowered in the first half of the game. It can single-handedly carry players through the first half on the Intense difficulty. While Reaper of Bones has some useful survivability utility, it is entirely unnecessary for low-level Graveborn characters when ‘Dire Sacrifice’ can clear hordes of skeletons at the press of a single button.

What further eases the player’s time leveling the Graveborn is the mathematics behind Hero Stats in Tiny Tina’s Wonderlands’ early game. While incredibly important in the late game, the critical hit chance provided from dexterity is trivial due to the stat’s multiplicative nature. In fact, almost every Hero Stat is mathematically insignificant to player performance in the chaotic and unplanned flow of the early game. These stats can significantly boost pushing builds in Tiny Tina’s Wonderlands’ end-game. However, the only Hero Stat to give a noticeable boost in the early game is Constitution. For Graveborn players, this is a massive boon, as ‘Dire Sacrifice’ will directly translate this increased survivability into more AoE damage.

When comparing the Graveborn to all other classes in Tiny Tina’s Wonderlands, the Graveborn has the least gear-dependent early game. Players will be able to rely almost entirely on ‘Dire Sacrifice’ to act as their main source of damage all the way until Level 20. Around this mid-point in the player’s leveling experience, they should be getting more powerful gear and unlock the ability to multiclass. Depending on the nature of the equipment, players will want to choose an appropriate secondary class to capitalize on it. Players without any strong gear at the point of multiclassing will be able to choose Spore Warden to focus more heavily on ‘Dire Sacrifice’ while also gaining more access to companions. Players with a slew of powerful guns that out damage their ‘Dire Sacrifice’ can choose Tiny Tina’s Wonderlands’ Stabbomancer to lean into the status side of both classes. But the most powerful form of the Graveborn is its pairing with the Spellshot, which players should take if they find a powerful, spammable AoE spell. When acquiring this multiclass, players should respec their Hero Stats and Hero Skills to switch from their lower-level build to the build that will see them to the end of the story.

Before the ability to multiclass, players have a straightforward path they can follow. Regardless of what Character Background the player chooses, the first 20 Hero Points should be spent on Constitution. Each point of Constitution increases Max Wards and Max Health, which also translates into increases in self-heal and damage-output for the Graveborn. While the Graveborn slowly turns into a spellcaster after unlocking their class feature in Tiny Tina’s Wonderlands, the class’s entire early game identity is ‘Dire Sacrifice.’ The first five skill points should go into ‘Mortal Vessel,’ followed immediately by five points into ‘Dark Pact.’ Players can then freely choose any skills as they make their way towards the mid-game. Players should avoid grabbing both ‘Faithful Thralls’ and ‘Harvest’ until they start putting points into ‘Dark Hydra.’

This build is powerful and adaptable, which is important for the early-game of Tiny Tina’s Wonderlands. In end-game content, players have control over their available gear, but this isn’t the case for the leveling process. Instead, players will need to survive with what they have. The Graveborn thrives in this low-resource state, giving players an exhilarating leveling experience through Tiny Tina’s Wonderlands’ epic D&D-inspired story.

Bryan Thompson is a new Gaming Guide writer for Screen Rant. He finds the most enjoyment out of difficult game content, and is always on the hunt for a greater challenge. Beyond video games, Bryan is an avid Dungeons & Dragons nerd and could talk your ear off about the science of human language.