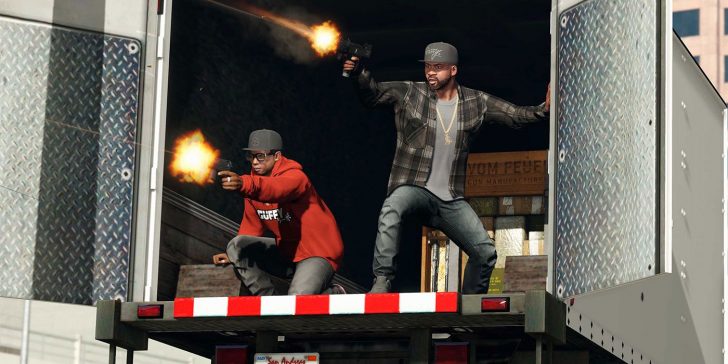 GTA Online developer and publisher Rockstar Games has announced that it has made the game’s Short Trips missions available and accessible to all.

Rockstar Games has now made GTA Online’s Short Trips co-op missions available to all players. GTA Online’s The Contract update stars Dr. Dre as a potential client for the celebrity problem-solving agency GTA 5’s Franklin Clinton is setting up in partnership with the player protagonist. Dr. Dre’s missions make up the main story of The Contract and the aforementioned Short Trips missions were introduced as part of the update as side missions that were only accessible once the player completed the update’s main story.

The Short Trips missions are two-player co-op missions starring Franklin and his best friend Lamar Davis. The missions revolve around Lamar following in Franklin’s footsteps and attempting to set up a legitimate business of his own. Lamar calls in Franklin to help deal with a few issues that’s stopping his business from getting off the ground. While beating Franklin and Lamar’s Short Trips missions isn’t too difficult and doesn’t take too long, they’re definitely a fun and interesting break from the rest of the update’s content. Currently, there are only three Short Trips missions available in the game so far, although it wouldn’t be impossible for Rockstar Games to add more in the future.

GTA Online developer and publisher Rockstar Games has announced that the Short Trips missions are now available to all players and are easily accessible via the game’s Jobs Menu. Additionally, to celebrate the content’s wider availability, the Short Trips missions will be paying out twice the amount of GTA$ and RP until February 16, 2022. Rockstar Games also released a new trailer for the side content, which features music from NEZ and ScHoolboy Q. Similar to GTA Online’s Dr. Dre soundtrack, the new musical track included in the trailer, called “Let’s Get It,” will be available in-game and will also be released on music download and streaming services soon.

Rockstar Games didn’t reveal why it decided to make the Short Trips missions accessible to all but it’s likely that it’s part of the company’s future content plans for The Contract update, which has now been out for almost two months. It’s possible that the studio may either have more Short Trips missions scheduled for release or it’s working on a completely new set of story-based content for The Contract update. Just last month, Rockstar released an update that added GTA Online’s new Double Down adversary mode.

In spite of how few and short they are, being able to access the Short Trips missions without having to go through the entirety of The Contract update’s main story is definitely a plus for players. And being able to get double the rewards is a great bonus and incentive to finish them soon.

X-Men Theory: Eternals Did Set Up MCU Mutants After All