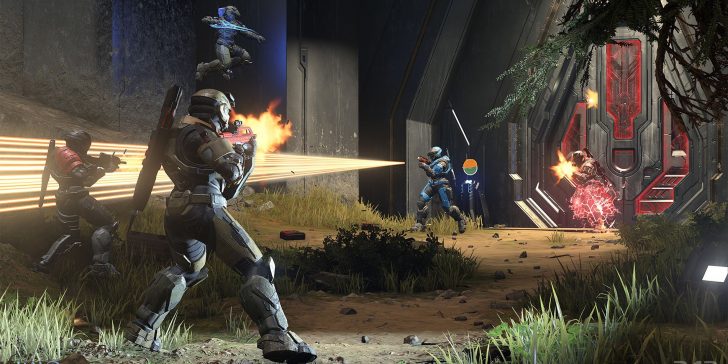 Some extensive new footage showcasing what is allegedly Halo: Infinite’s Forge mode has leaked online, allowing players an in-depth look at what might be possible when it is eventually released. The latest installment in the Halo franchise debuted last year after a long delay, though the title did not feature many series staples the community has come to expect.

The unorthodox piecemeal release of Halo: Infinite started with the surprise early launch of its multiplayer prior to the game’s official December 8, 2021 debut. That day did not, however, see the full release of everything that was to be expected in the title and there are still some notable absentees. Earlier this month, Halo: Infinite’s Forge and co-op modes were delayed even further, and currently, they have no official launch date.

In the meantime, Halo fans can get a glimpse at what could be after Polygon reported on a supposed leaked showcase of Forge mode. The near 50-minute video was posted by YouTuber Unseen Hero and demonstrates the many different features players might be able to do once the mode debuts. According to the video’s description, the footage originally came from the channel Thisistheone, a channel that posted other potential Halo: Infinite leaks some time prior. As of now, there appears to be no trace of the Forge mode showcase from the supposed original source.

It is worth noting that there have recently been other leaks of Halo: Infinite’s Forge mode that look a bit different from what is presented in the 50-minute piece. These different leaks seem to be showcasing finished results rather than the mode’s mechanics. Currently, none of these potential reveals have been confirmed to be from Forge and it seems unlikely 343 will say anything about it until the mode is nearer to completion.

The entire development process surrounding Halo: Infinite has been an oddity and it appears that it will continue to be for some time. After a year-long delay during which 343 was uniquely transparent its whole process, the promised final game was and continues to be released in portions. Yet in spite of the clearly unfinished nature of the title, Halo: Infinite reviews are generally positive which is a rarity throughout the entire gaming landscape. In an odd way, this unorthodox strategy may be in the game’s favor as it gives the community new pieces of large content without requiring additional spending from players. That will likely only continue to work, however, if the still-to-come content is of high quality.

Halo Infinite is available on Xbox One, Xbox Series X/S, and PC.