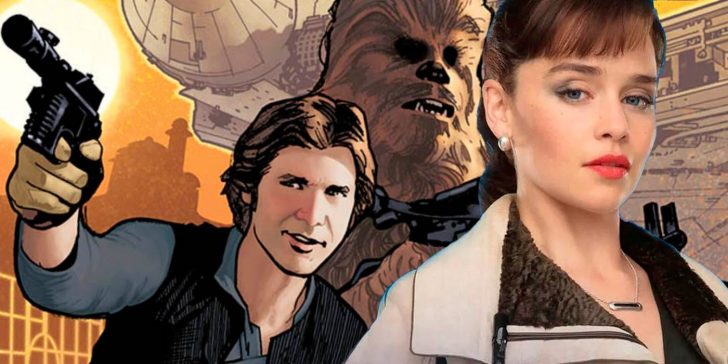 After Solo: A Star Wars Story, Han ran into Qi’ra again while she was working with Maul in Crimson Dawn. In the film, it seemed that they parted ways.

After Solo: A Star Wars Story, Han Solo and Chewbacca ran into Qi’ra again, while she was working with Maul in Crimson Dawn. In the film, it seemed that they parted ways for good, but they will reunite in Han Solo & Chewbacca #3.

Before Han Solo and Chewbacca joined the Rebel Alliance, they had years of adventures together as smugglers. As teased at the end of Solo, they worked for Jabba the Hutt on Tatooine. Partnering with Greedo, they pull a heist as seen throughout Han Solo & Chewbacca, written by Marc Guggenheim with art by David Messina. The miniseries is providing new context to the past they reference throughout the original trilogy, and serves as a comic book sequel to Solo.

As revealed by StarWars.com, Han Solo & Chewbacca #3 will feature Han as he runs into his former love interest Qi’ra. The issue takes place after she moved up in her Crimson Dawn position and started working with Maul, teasing a connection with the ongoing miniseries Crimson Reign. The tie-in with Crimson Reign is unexpected, Han Solo & Chewbacca is set before A New Hope. Other Star Wars comics are currently set after The Empire Strikes Back. The issue features a cover by Phil Noto, with variant covers by Adam Hughes, Mike McKone, and Hikaru Uesugi. Han Solo & Chewbacca #3 is set to release in May.

Before Lady Qi’ra is chasing after Han Solo’s carbonite frozen body in War of the Bounty Hunters, she has another run-in with him that might involve saving him for a second time. The issue will find Han trapped on the top of a skyscraper, possible during another heist. With few options, he might be desperate enough to rely on Qi’ra if she shows up. In the moment, it is teased that he will even consider asking the Empire for assistance.

The issue guest stars “the Archivist” who is also called by the name Madelin Sun. In recent years, she has appeared a few times, most notably in Doctor Aphra and Crimson Reign. Sun is a Force user who would go onto join Qi’ra in her war against the Empire. With an ambivalent allegiance, she echoes both Qi’ra and Han, as they aren’t devoted to the rebel cause or the Sith. Instead, they fall somewhere in-between. For that reason, it’s difficult to predict how Qi’ra will react when she encounters Han and Chewie again.

The Death of Jean Grey Gets A Horrifically Cruel New Twist