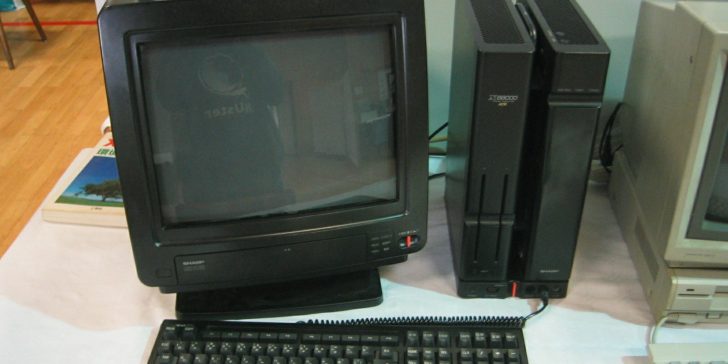 In the American canon, 80s retro gaming is almost always associated with dedicated consoles like the NES and the Sega Genesis. But in Japan during that same period, home computers were huge. And if you do any digging around into the history of Japanese video games in the late 20th century, you’ll start to see the name of one of these machines over and over — the Sharp X68000. Released on March 28, 1987 by the Sharp Corporation, the X68k was a Japan-only computer that was a home to numerous arcade ports, as well as hundreds of original hobbyist titles.

It’s a humble thing, looking at it now. With 1 MB of RAM and no hard drive at launch, the X68k ran an OS comparable to Microsoft DOS developed by Hudson Soft, called Human68k. Its case looked like no other computer at the time or since — two thin towers joined in an “H” shape. Several things made it attractive as a platform for home gaming — its high quality display, 8-channel sound chip and custom sprite hardware, which made it similar to arcade boards of the time.

That meant that there were arcade ports aplenty on the X68k, many of which were far superior to those being released for home consoles of the time. Ports of Capcom games in particular abounded, because Capcom used the X68k while developing games for its CPS-1 arcade system. The system’s port of Super Street Fighter II, for instance, is probably the best 16-bit version of the game to ever be released. Other well-regarded ports that blow their contemporary home peers out of the water include Strider, Final Fight, and Ghouls ‘n Ghosts.

X68k owners had more to enjoy than just arcade ports, though. Over 800 games were released for the computer, with many being produced by hobbyists well after its discontinuation. It was home to an exclusive version of the original Akumajo Dracula, which went unported until Castlevania Chronicles for the PlayStation in 2001. Nemesis ’90 Kai was a remake of Gradius 2 that has never been released elsewhere. And Cho Ren Sha was a fantastic shoot-em-up game that only received a modern Windows port (with some minor differences) in 2017.

The X68k was a unique, powerful home computer. Of course, all this power came at a price — around $3000 back in 1987, which would be more like $7500 (!) today. Still, it was an immensely popular machine, and one that had a major impact on video games. The X68k’s software is now freely available as public domain software, and at least a dozen games have been translated at this point. If your knowledge of retro games is limited to Sega and Nintendo, it’s worth investigating Japanese home computers of the 80s and 90s like the X68k, the PC-9801, and the MSX. Some of the biggest developers of the following decades got their start on these computers, and they’re easier to emulate and mess around with than ever today. You can learn more about the X68k and other Japanese home computers at the Information Processing Society of Japan’s Online Computer Museum.