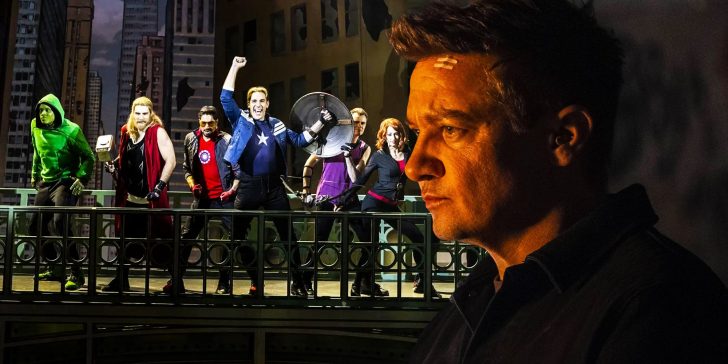 Marvel Studios: Assembled made it canon that all the original Avengers were asked to see Rogers: The Musical, so why did only Clint show up?

Marvel Studios: Assembled’s ”The Making of Hawkeye” revealed that all of the Avengers were invited to see Rogers: The Musical in Hawkeye, yet Clint was the only one to show. Hawkeye finally allowed for a more introspective look into one of the original six Avengers, with Clint Barton (Jeremy Renner) being widely overlooked in previous MCU installments. It follows him mentoring Hailee Steinfeld’s Kate Bishop (possibly hinting at Clint’s MCU future as an Avenger), as well as working through his grief about losing Natasha (Scarlett Johansson). Oddly enough, this journey starts by showing him watching the new Captain America musical sensation on Broadway–but he wasn’t supposed to be alone in that.

Rogers: The Musical is based on the life of Steve Rogers/Captain America. In Hawkeye, it works as a fun nod to the events of The Battle of New York in 2012, showing how the world has progressed from that event, as well as the Snap. A later episode in Hawkeye also shows the plaque in New York City dedicated to where the Avengers first assembled. This, the musical, and other nods throughout the show serve as a tribute to the original superhero team, and how the people of New York view them as heroes. The six original Avengers are showcased in the Captain America musical song ”Save The City” (as well as Ant-Man). Since Marvel Studios: Assembled confirmed that it’s canon that all of the Avengers were invited, it’s strange that Clint was the only one to show.

Clint sees the musical with his kids, which seems to be the only possible explanation as to why he went, as Clint would be the least likely to entertain something like Rogers: The Musical. This is supported by a scene later in the first episode, where the restaurant in which he’s dining with his kids pay for his meal as a thank you for saving the city, and Clint is clearly uncomfortable with the attention. Hawkeye is averse to the spotlight, proven when his secret family and wife Laura Barton were revealed in Age of Ultron. The gaudy musical, then, would be the last thing he would want to see, but it seems he went just to appease his kids. Clint’s whole trip to NYC with the kids for the holidays was an effort to make up for lost time after they were snapped out of existence for five years. As Hawkeye, Clint may want to avoid attention, but to his kids, he’s a hero who helped save the world. It’s only natural that they’d want to see a musical showing their dad being an Avenger.

Clint has always had a more understated life than the rest of the Avengers. His low profile makes it easy to blend into crowds and go about his life fairly unrecognized. It’s possible that some of the other newer Avengers didn’t attend for this reason. As for the original six, there are significant problems with the rest of them attending. Thor is off-world, seemingly doing some soul-searching with the Guardians. Hulk is hard not to recognize, and it’s possible the loss of Natasha was still too raw for him. Iron Man and Black Widow both died in the fight against Thanos, and as for Captain America, The Falcon and the Winter Soldier implied that he’d finally passed of old age before the events of Hawkeye. As for Ant-Man/Scott Lang, he wasn’t present for the 2012 battle, thus, he may have chosen not to attend the musical for that reason.

Despite the darker storytelling turn of MCU Phase 4, Rogers: The Musical was a fun inclusion for the MCU, yet again showing it tries not to take itself too seriously, while also showing the disparity between the Avengers’ real experiences and public perception. The songs, costumes, and choreography, paired with Clint’s confused reaction, provide a good piece of comedy in Hawkeye. While it would have been fun to see some other Avengers in the audience, there are concrete explanations for their unfortunate absences.

Next: Hawkeye’s Captain America Musical Creator Thought It Was A Prank