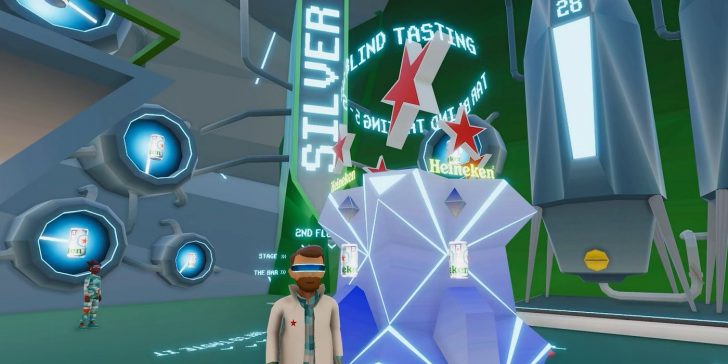 Heineken has launched what it claims to be ‘the world’s first virtual beer’ within the metaverse. The launch, however, is meant to be a joke.

In an apparent shot at the whole metaverse craze, Dutch brewing giant Heineken has launched a virtual beer that’s brewed exclusively within Decentraland. The metaverse has been getting a lot of attention from all quarters, with interest in the virtual world seemingly rising with every passing week. However, many skeptics are unmoved by the hoopla and have been casting doubts about how popular the concept will really be going forward.

The metaverse hype has reached such a level that companies are even launching consumer gadgets in the real world. One recent example is HTC, which is said to be making a so-called metaverse phone that will launch in April. The device will reportedly have the ability to be used with VR, although it’s impossible to tell at this stage what that will entail. It is exactly this insanity surrounding the metaverse that Heineken is now poking fun at with its new virtual beer.

Related: How Meta Will Let You Create New Worlds In The Metaverse

In a press release on Thursday, Heineken announced the launch of what it claimed to be ‘the world’s first virtual beer’ in its brewery within the metaverse. Named ‘Heineken Silver,’ the beer will only be available in the company’s virtual brewery in Decentraland. The company invited real journalists to the launch of the fake beer, and later joked that everyone was treated to “pixilated lobster and caviar” at the launch event. The unveiling of the virtual beer was very much a tongue-in-cheek event, with the company even describing the whole thing as “an ironic joke.”

Heineken Silver Is Meant To Be A Joke

According to Heineken, the virtual beer is meant to poke fun “at us and many other brands” that are jumping headlong into the metaverse hype by launching virtual products and services as publicity stunts. Describing the components that go into its virtual beer, Heineken said it’s made out of “the freshest pixels: no malt, no hops, no yeast, no water, and also, no beer.” The company added that some things are best enjoyed in the real world, and brews are definitely among them.

It is worth noting that while Heineken Silver may be the first virtual beer in Decentraland, it is not the first time a beer manufacturer took to the metaverse. That honor goes to Miller Lite, which opened a ‘Meta Lite Bar’ on the platform last month. The inexplicable hype surrounding the metaverse makes Heineken’s new marketing campaign all the more appealing, and the company knows that all too well, even promoting the virtual beer launch with the hashtag #awesomeheinekenmarketingstunt.

Next: The World Quite Literally Isn’t Ready For The Metaverse

How To Find And Recover Deleted Spotify Playlists