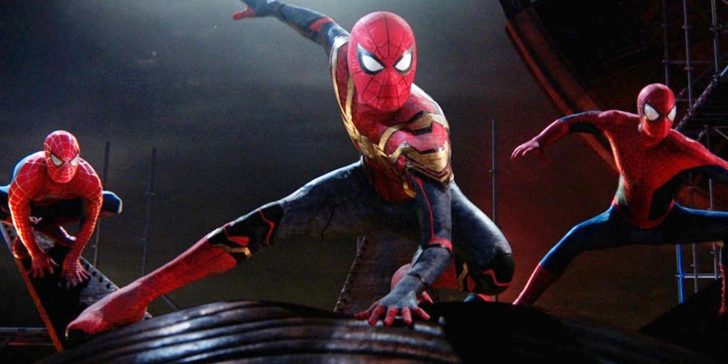 Tom Holland, Tobey Maguire, and Andrew Garfield sit together to discuss their work on Spider-Man: No Way Home in a new behind-the-scenes video.

A brand-new Spider-Man: No Way Home behind-the-scenes video shows Tom Holland, Tobey Maguire, and Andrew Garfield together discussing the film. More than two months after the release of the Jon Watts-directed MCU movie, spoiler details are starting to be officially rolled out as the film gears up for its home and digital release. But before that even happens, some bonus content has already made it online, including a commentary segment from its three Spider-Man actors.

Marvel Studios and Sony pulled off arguably one of the most interesting cinema crossovers of all time. As part of wrapping up Holland’s first MCU trilogy as the wall-crawler, Spider-Man: No Way Home also tied together all three live-action versions of the hero on the big screen. Just as Marvel Studios was establishing its multiverse, Watts used this as an opportunity to bring both Maguire and Garfield back into the superhero movie sandbox. It was tricky to deal with the narrative specifics, but overall, the creative team behind the blockbuster pulled it off brilliantly.

As part of Spider-Man: No Way Home’s digital and home release, Holland, Maguire, and Garfield sat down together for a chat where each talked about their experience working on the film. Holland is obviously very thankful, but more interestingly, Maguire admits that he struggled in keeping his involvement a secret, because he wanted to announce it so badly. What made this moment more fun is Garfield’s hysterical giggling. Watch the clip shared by @gilmour34 on Twitter below:

Months before Spider-Man 3 even got its official title, there were already rumors that Maguire and Garfield were coming back in No Way Home. As more information about the film was revealed, including its multiversal aspect, fans became more convinced that this was the case. Couple that with a few photo and video leaks, and people were almost sure that it was going to happen. Despite that, both Marvel Studios and Sony were tightlipped. Holland and Garfield were asked about the speculation repeatedly leading to the film’s premiere, but not Maguire. Luckily, the Spider-Man: No Way Home home and digital versions will include the rest of this commentary where he talks about his initial thoughts about joining the threequel.

At this point, there are no official announcements regarding Maguire and Garfield’s respective futures as Spider-Man after Spider-Man: No Way Home. However, there are already rumors regarding this matter. Garfield could be awarded the much-clamored The Amazing Spider-Man 3, meanwhile, Maguire could potentially appear in Doctor Strange in the Multiverse of Madness. As for Holland, his MCU future is already secured with Spider-Man 4 officially in the works. Aside from these, hopefully, all three get to work together again considering how much fun they’ve had in filming the record-breaking blockbuster.