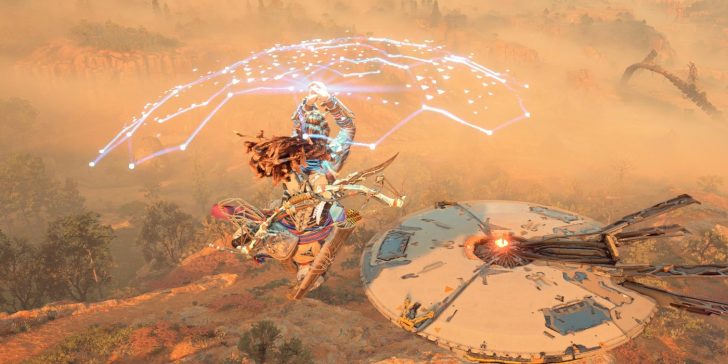 Surprise, Tallnecks are back in Horizon Forbidden West. The walking watchtowers from the first game remain ever-present, allowing Aloy to hop on their heads and clear the fog of the map on the surrounding area. That being said, the sequel introduces a bit more platforming in order to unlock Tallnecks. This guide explains how to complete the Horizon Forbidden West Cinnabar Sands puzzle to get a hold of the first Tallneck you encounter.

If you’re in need of more help, we also have guides covering the missions list and how long the game is, how to unlock the glider, the complete list of skills, how free fast travel works, and 20 tips.

In order to encounter your first Tallneck in Horizon Forbidden West, you have to progress through the main story up to Death’s Door, which is the fifth mission. Then, the world will open up quite a bit, and a character will mention a Tallneck location nearby. This is optional, but clearing the map fog is a huge help. Once you get close to the Tallneck, you automatically obtain the Horizon Forbidden West Cinnabar Sands quest. The steps are as follows:

As well as revealing part of the map, you get two skill points and over 7,500 XP for your trouble. If you feel overwhelmed by all the side tasks in the game, Tallnecks are always worth prioritizing since it usually doesn’t take too long to complete one of their quests.

The main objective is to climb up the massive dish to gain enough height. You’ll notice the console that powers it isn’t working. Proceed to climb all your way up until there isn’t anywhere left to keep on climbing. There is a database collectible on a table nearby and, if you go around the edge of the platform, you can spot a few ledges that lead to a generator. Now, use the stairs the climb back up. The terminal is now fully powered, so go ahead and interact with it. The dish immediately attempts to move to its original form, but something is preventing it from doing so.

Turns out there are two damaged Power Cables in the way. For this, use your focus by holding R3 and, once located, shoot both of them using your regular arrows. This finally sets up the dish as we first wanted it to be. Once that’s settled, head back to the highest platform from the beginning. The path ahead is fairly straightforward. Focus on the ledges that lead to the ladders then keep on moving up. Once you’re on the very top of the dish, it’s time to jump — hold on until the Tallneck is close to your location and then make a run for it. Jump in mid-air and immediately use the glider to land on top of the Tallneck.

All that is left to do is to head to the center and override it. If you’ve played Horizon Zero Dawn, the sequence is fairly similar. That’s all you need to know about the Horizon Forbidden West Cinnabar Sands quest! If you’re in need of some additional help, our guides on fast travel, skills, and Smoke Bombs may come in handy.