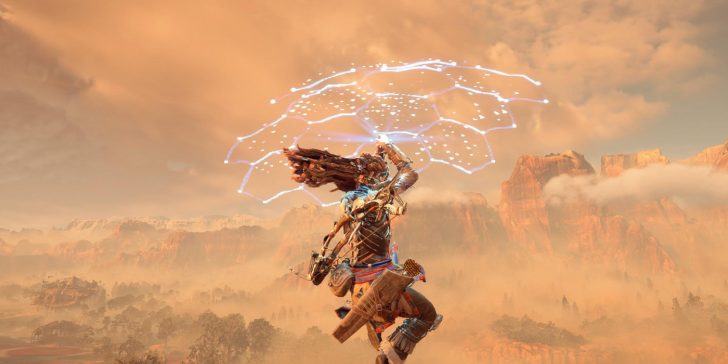 The world of Horizon Forbidden West is, quite frankly, huge. The sequel from developer Guerrilla Games isn’t shy about its dozens of biomes and corners to explore. While its predecessor allowed Aloy to travel around either on foot or by mounting a machine, Horizon Forbidden West introduces the Shieldwing, which serves as a glider. If you’re feeling nostalgic about The Legend of Zelda: Breath of the Wild, you’ll likely enjoy using this tool. This guide explains how to unlock the glider so you can plan ahead accordingly.

How to Unlock the Glider – Horizon Forbidden West Shieldwing

In order to unlock the Horizon Forbidden West Shieldwing, the steps are as follows:

Progress through the main story until you reach The Embassy, which is the fourth main quest.
Without spoiling what happens, you can expect several enemy encounters, so just prepare yourself for them.
Then, as the conflict begins to settle, Aloy has to face a champion who is carrying a peculiar device: the Shieldwing.
Focus on the fight, and once that’s settled, prepare to watch a few more cutscenes.
It’s not possible to loot Regalla’s Champion right away, but don’t worry, as you automatically come back to the location afterward.
Once you do, Aloy automatically picks up the Shieldwing, finishing the quest. You can also loot the body for some useful materials. That’s the gist of it. All in all, it won’t take long to unlock the Horizon Forbidden West Shieldwing if you focus on the main story alone right until this point. Regardless, these steps serve as useful pointers in case you decide to spend time around the beginning areas and keep wondering when exactly Aloy obtains the glider.

Your encounter with Regalla’s Champion can be quite tough depending on your difficulty of choice. While he shows up to fight using the Shieldwing as a glider, he also employs it as a shield. As such, you need to focus on breaking that defense before being able to strike him directly (although you still can during certain movements). For this, both your Acid Arrows and Ice Bombs can do the job just fine. He can’t handle Acid Arrows at all.

In my experience, the previous encounters were much harder in comparison, but Regalla’s Champion can still be troublesome once he gets close to you. Break his defense, follow up with a few attacks using your spear, and repeat until he’s finished.

Afterward, while his body remains in place for a few seconds, you don’t get the chance to immediately loot it. Instead, a few cutscenes will unfold. Just sit back, relax, and take in the story — don’t worry about the loot as you are taken here again once the cutscenes are over. Aloy will approach the fallen champion and grab the device, which unlocks the Horizon Forbidden West Shieldwing for you to use. It’s a simple concept: Every time you have a bit of altitude, even outside of cliffs, press X to jump and then Square to activate the glider. If you want to stop using it for any reason before you touch the ground, go ahead and tap Circle.

Congratulations on obtaining the Shieldwing! Horizon Forbidden West really opens up after this point in the story, so make sure to prepare yourself with the right skills and a handful of Smoke Bombs, in case you haven’t unlocked them already.