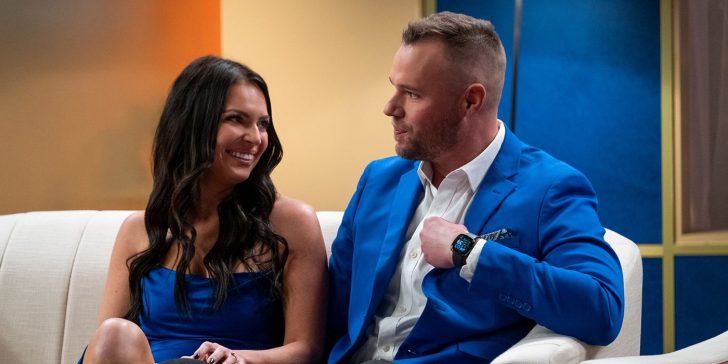 Danielle Ruhl and Nick Thompson were very rocky on Love Is Blind but are crediting their couples counseling for improving their marriage.

Danielle Ruhl and Nick Thompson were very rocky on Love Is Blind but are crediting their couples counseling for improving their marriage. Viewers watched as Danielle and Nick put their differences aside and made it down the altar. Many felt like Danielle’s insecurities were getting the best of her. However, Nick and Danielle are still going strong and crediting therapy for helping to strengthen their communication.

Nick and Danielle were the first pair to build a genuine bond inside of the pods that led to an engagement. Once in Mexico, things started to go left after Danielle took issue with Nick attending a couples party that she skipped out on attending. Danielle went off on Nick and faced backlash from viewers who felt like she was projecting her insecurities on Nick. Throughout their time getting to know each other ahead of the wedding, Nick and Danielle bickered constantly due to issues of insecurity and poor communication. Being one of only two couples to get married during the finale, fans are wondering if Danielle and Nick have what it takes to make their marriage work.

As newlyweds, Danielle and Nick recently dished on how they’re keeping their marriage strong. “We’re in couples counseling and we have been now, for almost the entire time since we’ve finished [the show],” Nick told People. He explained how they have “put frameworks in place” that have helped improve their “communication.” With Nick and Danielle getting engaged before they even knew what each other looked like, they have had an extremely unconventional start to their marriage. But while navigating the different things that can set them off, Nick says he and Danielle to learn how to “articulate” their feelings in ways that don’t cause a big fight. “Sometimes that means walking away for a little bit or sometimes that means, ‘Let’s table it and drop it and forget about it,’ ” Nick explained.

Danielle had to deal with criticism from viewers online after the show aired. Despite how relatable many found her and her mother to be, they weren’t impressed with her behavior towards Nick. But through counseling and working out their differences, Nick credits their “communication” for helping them “move forward.” In addition to couples counseling, they each started personal counseling to identify any past trauma that still needs healing. Many applauded Nick for being patient with Danielle and sticking by her side despite their heated exchanges.

However, through therapy, Danielle says she and Nick have been able to avoid “unnecessary conflicts” that lead other couples to break up. Danielle and Nick joined Jarrette Jones and Iyanna McNeely as the only two couples to get married in the Love Is Blind finale. With so many couples that didn’t make it down the altar, Nick and Danielle are doing the hard work to make their marriage work. Danielle has responded to the backlash from fans and owned up to projecting her anxiety onto her husband. Danielle had to watch the arguments back on television likely helped her face the hard truth about the areas she needed to work on.

Next: Love Is Blind: Deepti Thanks Jarrette & Shayne For Warning Her About Shake