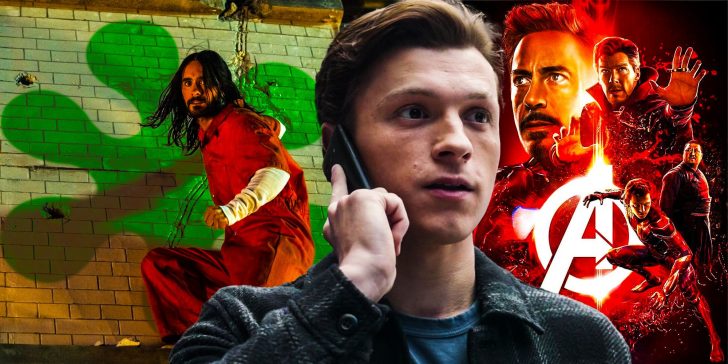 Sony’s newest Marvel movie, Morbius, is taking a beating in its Rotten Tomatoes debut, coming in significantly lower than their previous Spider-Man adjacent films. While Sony has historically seen big success on Rotten Tomatoes with some of their Spider-Man solo movies, the newer films in Sony’s Spider-Man Universe haven’t fared as well, so how does Morbius measure up?

Before the advent of the Marvel Cinematic Universe, Sony’s Spider-Man trilogy with Tobey Maguire was one of the first huge breakouts for Marvel on the big screen, although the studio could never keep the franchise going for long. Spider-Man and Spider-Man 2 were wildly popular with audiences and critics, scoring big scores in Rotten Tomatoes, but Spider-Man 3 faltered. The rebooted franchise had a similar fate, with Andrew Garfield’s debut in The Amazing Spider-Man seeing a mostly positive reception, while critics turned on The Amazing Spider-Man 2. Meanwhile, in the time between those two franchises, the MCU was born, beginning a long string of Fresh ratings in Rotten Tomatoes only rivaled by Pixar.

While Sony now partners with Marvel Studios to make solo Spider-Man movies set in the MCU, they still own the rights to Spider-Man and a plethora of related characters. Thanks to Venom: Let There Be Carnage and Spider-Man: No Way Home’s post-credits scenes, they may be tangentially connected to the MCU, but they’re still very much Sony products, and although they’ve seen some box office success, Sony’s Marvel movies don’t see the same positive critical reception in Rotten Tomates as the movies in the MCU, particularly in the case of Morbius.

Focusing in on the three SSU movies so far, including Venom, Venom: Let There Be Carnage, and Morbius, the overall average comes out significantly lower at 35 percent (while the Tobey Maguire Spider-Man movies directed by Sam Raimi average 82 percent and the Andrew Garfield Spider-Man movies directed by Marc Webb average 62 percent in Rotten Tomatoes), which is still more than double Morbius’ 16 percent Rotten Tomatoes score.

When it comes to Marvel movies, with Disney’s acquisition of 20th Century Fox, Sony is now the only other studio with its own Marvel continuity, and the MCU’s Rotten Tomatoes track record far outshines Sony’s, scoring even higher than the average Rotten Tomatoes scores for the Andrew Garfield and Tobey Maguire Spider-Man movies. The worst Rotten Tomatoes score in the MCU, and the only Marvel Studios movie not ranked Fresh on the Tomatometer, is Eternals at 47 percent, which outperforms any of the SSU movies except for Venom: Let There Be Carnage at 58 percent, standing 31 points higher than Morbius.

The average for the whole MCU is 84 percent, which is higher than any Marvel movie made by Sony other than the original Andrew Garfield Spider-Man at 90 percent and Spider-Man 2 at 93 percent. 26 out of the MCU’s 27 movies have a Fresh rating in Rotten Tomatoes, while reviews for Sony’s Marvel movies only resulted in four Fresh ratings out of eight films produced, with all three of Sony’s Spider-Man Universe movies earning Rotten scores. As the Sony Marvel movie with the lowest Rotten Tomatoes score, Morbius’ 16 percent Rotten Tomatoes score is 68 points lower than the MCU average. The difference between Morbius and the MCU average is so big it’d be rated Fresh if it were its own movie.

Of course, the lower scores for Venom and Venom: Let There Be Carnage didn’t negatively impact their box office returns. Venom earned $856 million in 2018, ranking it as the 7th highest-grossing movie at the worldwide box office in 2018, while Venom: Let There Be Carnage earned $502 million in 2021, also ranking it 7th in 2021’s worldwide box office, despite their low Rotten Tomatoes scores. Most new Marvel movies in the MCU earn over $1 billion at the box office, and both movies had MCU movies with bigger box office hauls in their respective release years, but those box office numbers are still a wild success for any other franchise.

While the Rotten Tomatoes scores for the SSU films pale in comparison to the MCU, the audience scores are much closer, with both Venom movies averaging 77 percent, compared to the MCU’s 83 percent average audience score, which is typically a much stronger indicator of box office performance than the critical Tomatometer score. Morbius just released, so its audience score could still swing pretty drastically, but it debuted at 55 percent for its “All Audience” rating, while the more recently implemented “verified audience” score is 65 percent, but for the sake of parity with pre-Verified Audience score movies, it’s best to compare the “All Audience” to maintain consistency. Considering the lower audience score and the fact that Morbius isn’t nearly as well known of a character as Venom, it’s doubtful Morbius will see the same box office success as Venom, but it may perform a little better than its critical rating would suggest.

Regardless, Morbius’ Rotten Tomatoes and Box Office are meant to measure a movie’s impact and ultimately shouldn’t have an impact on anyone’s opinion of the movie itself. Fewer critics like Morbius than any other Sony Marvel movie or MCU movie, but some did because art and entertainment value can’t be captured in the same simplified number for everyone. With more Sony Spider-Man Universe movies to come, like Kraven the Hunter, it’ll be interesting to see if Sony can start garnering stronger reviews and if the big box hauls enjoyed by the Venom movies will continue for Sony’s less well-known characters.

Next: The Most Overrated Movies in the MCU (According to Rotten Tomatoes)

Stephen has been writing for the site since 2016 and enjoys all manner of movies and TV, especially when it gives reason to obsess over minor irrelevant continuity minutiae.


Stephen has been infatuated with movie magic on screen and off since wearing out his VHS copy of The Making of Star Wars when he was 7. This passion continues in his work as a film journalist, whether it’s hunting down breadcrumbs about the Snyder Cut, breaking down box office trends, or obsessing over Rotten Tomatoes data, Stephen lives in the minutiae, as listeners of his podcast, Batman v Superman: By the Minute (with fellow-Screen Rant editor Andrew Dyce) know all too well.


When he’s not writing on the site, Stephen can be found obsessing over vintage camera lenses, chasing his tiny children around, or getting himself into trouble on Twitter @smcolbert.