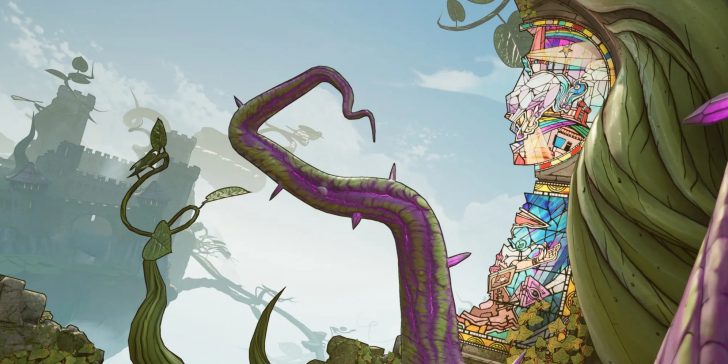 Tiny Tina’s Wonderlands is officially live and it’s time to roll for initiative! Set in the Borderlands equivalent of Dungeons & Dragons, players will join explosive aficionado Tiny Tina and her crew in a game of Bunkers and Badasses. While this title retains the same shooter-looter design of the core entries, it embraces a medieval setting that’s constantly changing under the whims of your Bunker-Master.

Unsurprisingly, you will come across many random side quests and puzzles as you explore this colorful gameboard. Some locations, such as Tangledrift, won’t even be accessible until you interact with specific NPCs. Once you deliver the magic bean to this location, he will lift up the entire city. But we don’t care about saving these people, because there’s a rune puzzle we need to solve in this area!

How to Complete the Tangledrift Rune Challenge

You can start the rune challenge after you slide down the stalk to the village below. Along the right side, you will see two large purple stalks and three floating runes near a guy sitting down. Approach the runes and interact with them to start the game. Your job is to activate each of the three runes in a specific order before the timer expires. This is actually way easier than it sounds, but it can be confusing at first since what you need to do is never explained.

When the game starts, jump back onto the main path and head towards the thin glowing green light. This will be just past Brick The Fairy Punchmother on a floating platform — hop onto the hay bale to reach this ledge. Approach the rune and interact with it to teleport back to where the game started. Additionally, you’ll gain more time on your clock, so don’t worry if you’re going a bit too slowly.

Now turn around 180 degrees and run along the beanstalk bridge to reach the raised area shown above. Go to the back of the house to find the second rune floating there. There shouldn’t be any enemies around, so don’t worry about needing to fight.

From the house, look down toward where you initially came from. You’ll see a well with the rune beam coming out from under it. Carefully make your way down to the cave below the well. The last thing you want to do is fall since you’ll respawn and probably not have enough time to get to the third rune. If you do make it to the cave, interact with it to trigger a shower of loot around you.

Once you’re done, go back through the portal and continue with your adventure. Remember, there’s no cost for doing this! If you aren’t fast enough, you can always try again. There’s really no reason to skip this given how simple the actual challenge is. Plus, who are we to turn down free money and gear?