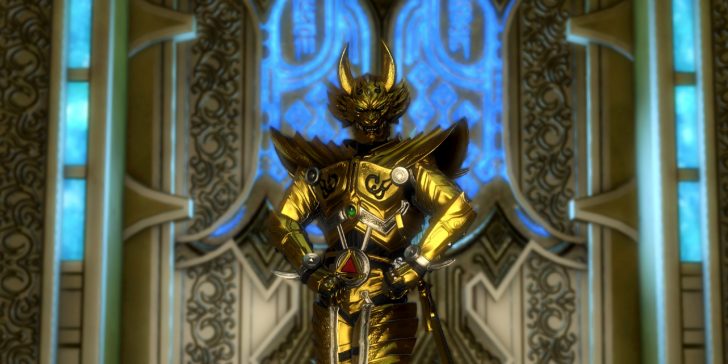 So you’ve decided to get that swank Garo collaboration gear. After a lengthy hiatus, all of the armor and mounts inspired by the tokusatsu horror franchise Garo have returned to Final Fantasy XIV. The event previously ended all the way back in Patch 5.1 but has returned with Patch 6.1, the first post-Endwalker patch.

The gear allows FFXIV players to cosplay as their favorite characters from the first series in the franchise. This includes the Golden Wolf himself, the eponymous Garo, and his fellow Makai Knights Kiba, Zero, Barago, and Dan. There are also outfits inspired by the franchise’s Makai Priests for all your ranged and healing jobs.

Where To Obtain the Garo Gear

First, you need to head to Wolves’ Den Pier in La Noscea. This is the PVP hub for FFXIV and where you’ll spend most of your time while grinding out this armor.

If you don’t already have Wolves’ Den Pier unlocked, you’ll need to first be a part of one of the three Grand Companies. Once you reach level 30, you’ll be able to pick up the quest “A Pup No Longer” from your respective Grand Company quest giver:

Once you reach Wolves’ Den Pier and attune to the local Aetheryte, you’ll want to hunt down the Disreputable Priest (X: 5.0, Y: 5.3). This character will have all the Garo gear and titles for you.

How to Obtain the Garo Gear

If you want the gear, you’ll need to do some PVP. You can do so by opening up your Duty Finder and then selecting the “PVP” tab under the “Regular Duty” section. You can choose to queue up for Crystalline Conflict (5v5) or Frontline (24v24v24) at the moment, with the Rival Wings (24v24) mode currently on hiatus for balance fixes.

Every time you compete in PVP, you’ll gain a currency called Wolf Marks, which can be used to purchase the Garo gear. Each Job has a set of Garo gear consisting of five pieces (Head, Body, Hands, Legs, and Feet), plus a weapon for the pre-Stormblood jobs. The full cost for a set of armor is 14,000 Wolf Marks.

Split by item type, the costs are as follows:

The accessories are not needed to get the titles associated with the event, so you should only worry about those if you like the looks for glamour.

What Gear Is Available

The Garo gear is all Job-specific in terms of wearing it as a piece of armor. While it initially sounded like there would be brand-new gear for the post-Shadowbringers jobs — Gunbreaker, Dancer, Sage, and Reaper — the team has instead ported existing gear over to those Jobs. The Disreputable Priest at Wolves’ Den Pier (X: 5.0, Y: 5.3) has all of the armor and weapons split across three menus.

Of those Jobs, there are currently no weapons for Samurai, Gunbreaker, Reaper, Dancer, Red Mage, Sage, and Blue Mage. Otherwise, each of the sets is tailored to a specific Job. If two sets are listed, that denotes that there are gender-locked sets, meaning one for male characters and the other for female characters.

The full list of sets and associated weapons is as follows:

The sets for some of the post-Shadowbringers Jobs are seemingly renamed versions of existing sets with new headgear — for example, the Makai Harbinger/Makai Harrower is just the Makai Mauler/Makai Manhandler. Likewise, the Makai Vanguard/Makai Vanbreaker is the Makai Marksman/Makai Markswoman set. The rest simply had new Jobs added to their listings. So if you’ve grinded out the Garo sets before, you might not need to do so this time.

How to Obtain the Garo Gear Without Doing PVP

What if you really hate PVP? No worries, friend — there’s actually a second way to obtain versions of the armor sets. The currency required switches over to MGP rather than Wolf Marks.

Go talk to the Gold Saucer Attendant in Gold Saucer (X: 5.4, Y: 6.6). Select the “Prize Exchange” options for the Job set you want.

The sets will have a slightly-altered “Tarnished” naming convention. You won’t be able to dye the armor obtained through this method and it doesn’t count toward the achievements. That said, it’s a good way to get the base sets and weapons for glamour purposes without doing PVP.

How to Gain the Garo Titles and Achievements

There are specific titles for the Garo collaboration events! To grab these titles for yourself, you have to obtain the full five-piece set of Job armor along with the corresponding weapon. Samurai, Red Mage, Gunbreaker, Dancers, Reaper, and Sage are exceptions to this rule, as they don’t have Garo weapons. For those Jobs, you only need the five-piece set.

Once you have the full set, equip it and talk to the Disreputable Priest at Wolves’ Den Pier (X: 5.0, Y: 5.3). Select “Receive a new title” and she’ll appraise your gear. If you have the right gear, she’ll award you with the title and achievement.

The full title of available titles and achievements is as follows:

Getting all of the titles will earn you the title “Makai Master” and the “Protector” achievement.

How to Gain the Garo Mounts

There are also three mounts available during the event, inspired by the Madoba combat horses from the show. Each mount is the result of an achievement. Once you unlock the achievement, you’ll need to go speak with Jonathas in Old Gridania (X: 10.6, Y: 6.3).

Achievement: Fame Fatale — Emerge victorious in 30 Feast or Crystalline Conflict matches while using a title received from the disreputable priest.

Achievement: Frontline Fury — Emerge victorious in 30 Feast or Crystalline Conflict matches while using a title received from the disreputable priest.

Achievement: Furious Fatalities — Emerge victorious in a combination of 60 Frontline/Rival Wings campaigns or Feast/Crystalline Conflict matches while using a title received from the disreputable priest.