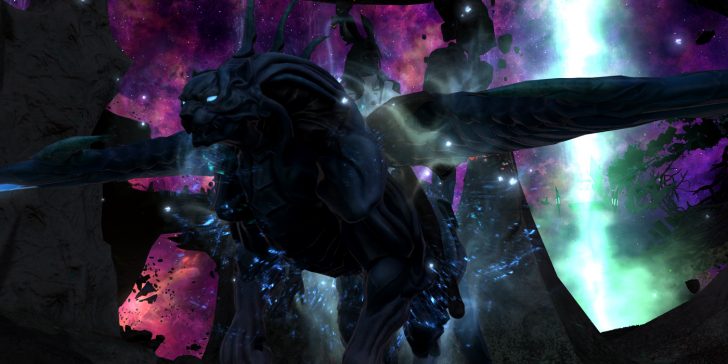 As we welcome a new journey in Final Fantasy XIV‘s 6.1 update, you may have noticed an unfamiliar shiny-winged cat soaring through the skies. That’s probably the Bluefeather Lynx, a mount reward added for the reimagined encounter with Endwalker‘s final boss, The Endsinger.

Scoring any of the available Lynx mounts isn’t a particularly easy feat, but there’s more than one path to capturing the cat as your own. We’ll break down how The Endsinger plays a role in all of this, what you do with her Ultimatum Tokens, and how you can score the Bluefeather Lynx when RNG fails you. With that being said, there are some minor 6.0 spoilers below.

FFXIV‘s seemingly endless flow of currencies and tokens don’t all work in the same ways, and that can make things a little confusing. If you’re new to trying Extreme difficulty trials, it may come as a surprise that you always receive one or two totems for every clear even if the content is new. This isn’t like Savage or Alliance Raids, where you’re limited for a while until Square Enix unlocks the reward restrictions. There is no loot lockout.

Extreme difficulty means these fights are already harder than their normal counterparts, but a handful of encounters like Hades EX, Diamond Weapon EX, and now Endsinger EX reward two totems instead of the usual one. These are typically considered harder, longer encounters, and worthy of a bump in bonus for the time invested.

Spoils from Extreme trials have changed over the years, but in Endwalker, you’re always guaranteed totems, one weapon coffer, and one random job weapon. Other drops, like Triple Triad cards, crafting materials, orchestrion music, and those super rare mount drops, are random. You could beat The Endsinger EX thirty times and never see the mount drop, or you could see one on your first clear. All of these are limited to one per clear, though, so grinding for any particular drop can become quite a grind.

With the launch of FFXIV Patch 6.1, you can challenge an extreme version of The Endsinger after completing Endwalker‘s main scenario quests. Speak to the Wandering Minstrel in Old Sharlayan (X: 12.7, Y:14.2), and he’ll hook you up by unlocking the fight. If you’re worried about the increased difficulty, check out our guide for Endsinger EX before jumping in.

How to Get the Bluefeather Lynx Mount

The Endsinger’s Bluefeather Lynx mount has two paths to acquisition, but only one is available right now. As of FFXIV Patch 6.1, you can only summon that sparkling cat if you’re lucky enough to score the Bluefeather Lynx Flute from an Endsinger EX treasure chest. FFXIV’s Extreme encounters are notoriously stingy with mount drops, so it may take a while before you see one drop. You’ll also have to roll against your party members, leaving you to watch it slip between your fingers or prance around mounted on new bragging rights.

Fortunately, Yoshi-P is at least a little merciful. After a few patches, EX trials always add a totem exchange option for the mount. These vendors require 99 totems, and we won’t see The Endsinger mount as an option until sometime after the Hydaelyn and Zodiark mounts are made available.

That 99 sum seems like quite a bit, but if you’re keen on collecting mounts and farming, you may easily rack that many up over time. Hopefully, the cataclysmic joining of the Meteia has learned to be a little less stingy after we dunked on their collective despair in MSQ, but not likely.

You can save up 99 Ultimatum Tokens to exchange for the Bluefeather Lynx mount in a future patch, or you can spend them now for job weapons. Speak to Nesvaaz in Radz-at-Han (X: 10.6, Y:10.0) to trade 10 Ultimatum Tokens for one item level 595 Job weapon aside from Paladin, which requires three tokens for the shield and seven for the sword.

Unless you’re pressed for the gear, anyone chasing the mount should avoid spending their tokens on weapons unless the flute drops early in their grind. With weapon rewards guaranteed every time, it’s entirely possible you’ll collect a full arsenal for every FFXIV Job before ever scoring a Bluefeather Lynx. Spare yourself. So, save yourself the headache of five more runs and pocket those 10 tokens for a rainy day.