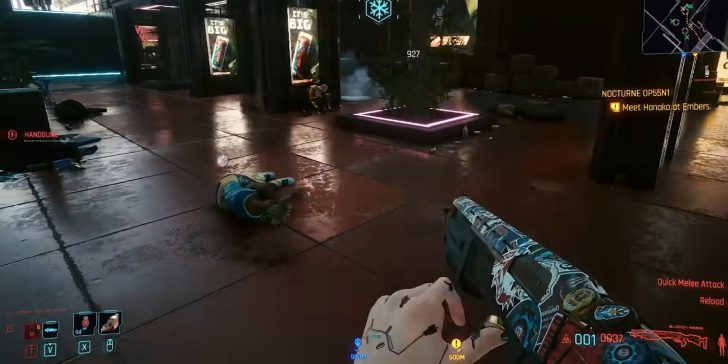 The Bloody Maria shotgun is a new weapon that players can get in Cyberpunk 2077, capable of knocking enemies down and inflicting a bleeding effect.

The Bloody Maria is not only a pump-action shotgun, but it’s also a Power weapon just like the new Budget Arms Guillotine SMG in Cyberpunk 2077. As a Power weapon, the Bloody Maria shotgun has pellets that can ricochet off of surfaces to inflict even more damage. Additionally, this new shotgun has increased critical damage, an increased chance to inflict critical damage, an increase to the headshot bonus multiplier, and bonus damage to the ricochet pellets themselves. Furthermore, the Bloody Maria has an increased chance to knock down enemies, cause dismemberment, and inflict the bleeding effect on all enemies.

Related: How to Update PS4 Cyberpunk 2077 to PS5 Version

Players can even get more bang for their buck with the new shotgun with the Annihilation skill tree, specifically from the Poppin’ Off perk. The Poppin’ Off perk grants an increased chance to dismember enemies, on top of the chance that players have from the Bloody Maria alone. Unfortunately, the new muzzle brake weapon attachments in Cyberpunk 2077 can’t be applied to the Bloody Maria, as they’re specifically for SMGs, handguns, and assault rifles in the game. However, the Bloody Maria may very well be the best shotgun in the game regardless. With the ability to load eight shells into the magazine, players who wield it are essentially a one-man-army.

Where To Get The Bloody Maria Shotgun In Cyberpunk 2077

While players can buy most weapons from Wilson’s 2nd Amendment store, or even loot them from any of the enemies across Night City, the new shotgun can’t be purchased in Cyberpunk 2077. Instead, the Bloody Maria shotgun can only be obtained by completing one of the side gigs from Muamar “El Capitan” Reyes. Once players have completed every gig for Reyes, he’ll call them for one last side gig called “Ride Captain Ride,” and it’s one of the simplest gigs available.

After getting the call from Reyes, head to any one of the locations of V’s apartments in Cyberpunk 2077 to access V’s stash. The only objective of this side gig is to retrieve the Epic quality Bloody Maria from their stash. Furthermore, players can upgrade the quality of the Bloody Maria to Legendary, making it one of the most devastating weapons overall in Cyberpunk 2077.

Next: Cyberpunk 2077: How to Unlock The New Darra Polytechnic Umbra

Baldur’s Gate 3: How The Barbarian Is Different From Other Classes