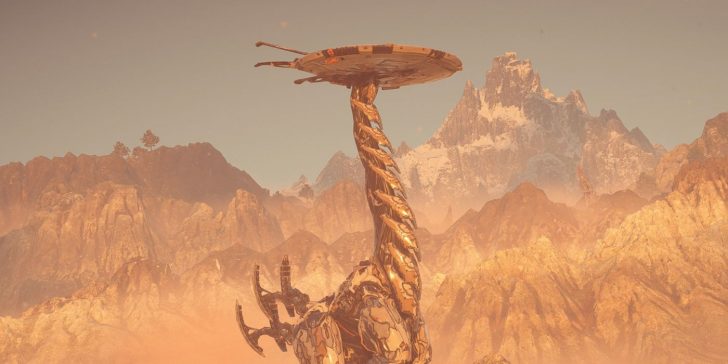 There are six different Tallnecks to override in Horizon Forbidden West. The Tallneck in the Shining Wastes can be done during the main story.

Overriding a Tallneck in Horizon Forbidden West opens up the map for more exploration. With six Tallnecks in total, the one in the Shining Wastes can be difficult to complete if the player doesn’t know what to do. As Aloy explores this new world, she’ll come across over 40 machines, each with its strengths and weaknesses. Not only that, but Aloy will learn to override them, transforming enemies into temporary allies. In the case of the Tallnecks, they are passive creatures that will leave Aloy alone.

Accessing the top of its head will clear out the fog on the Horizon Forbidden West map as well. This will make it much easier to plan for a trip with the entire map cleared out. Each Tallneck has its own method of overriding. While each one requires Aloy to reach the top, getting up there is different each time. Some may be locked until Aloyt receives a certain upgrade or ability. In the case of the Tallneck in the Shining Wastes, players will need to wait until a certain mission in the main story.

The Tallneck in the Shining Wastes will be located near Arrowhead. Unfortunately, there’s no direct way to interact with this Tallneck just yet since there’s no structure to help Aloy reach the top. Instead, this Tallneck one can be overridden during the main story, which will occur during the ‘The Wings of the Ten” mission. This is the 16th story mission in the game, and it’s recommended that players be at least level 32 and have important skills unlocked in Horizon Forbidden West before tackling it.

Completing The Wings of the Ten Mission in Horizon Forbidden West

At the start of Tilda’s mission, the player will need to travel to the base to find everyone mourning the death of an important character. Things are looking grim right now, but Aloy wishes to continue her mission. Players need to carry on through this mission until they learn the ability to override a Sunwing. The Sunwing is one of the many unlockable mounts in Horizon Forbidden West. This can be done inside of the Fabrication Terminal, and the Sunwing is used to help Aloy fly around at top speeds. Head to the top of the mountain and sneak up to the Sunwing to override it.

After successfully doing so, mount it and fly around until Tilda gives the next directions. She will point out the Tallnecks location on the map, so use the Sunwing mount to get it. Land on the top of its head and override it to unlock a new section of the map. After overriding this Tallneck, Aloy will need to jump off and head to her next objective.

More: Horizon Forbidden West: How To Defeat a Grimhorn