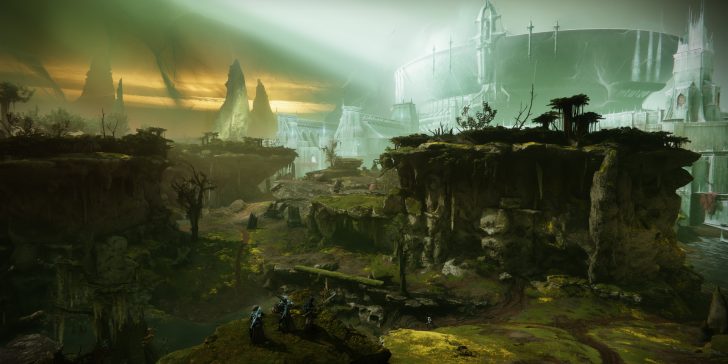 Of course with a new expansion and destination comes a new Public Event. Called the Resonant Splinter, this Public Event can be found in Savathun’s Throne World. Similar to games like Team Fortress 2 and Overwatch, this Public Event has players escorting a cart and defending it from enemies. While you can earn some rewards, the best ones come from making this a Heroic Public Event. How to Make Resonant Splinter Heroic

To trigger the Heroic variant of the Resonant Splinter Public Event you need to throw 6-8 Resonant Charges at the cart. These are the glowing orange orbs shown in the photo above. Random enemies will drop these orbs when they die, so you need to keep an eye out for them as you’re riding the cart. Once you have an orb, turn and toss it at the cart to cause it to explode.

During my time testing this around 2-3 orbs spawned before the first shielded area and then several more after the shield dropped. Keep riding the cart, killing enemies, and keeping your eyes out for the orbs that drop from foes. I don’t know the exact amount needed to trigger a Heroic Modifier, but I know it’s at least six since that’s how many both myself and personal fireteam threw. Once you trigger the Heroic Modifier, continue riding the cart to the end and a bunch of Scorn bosses will spawn. These are just yellow-bar Chieftans and shouldn’t be any trouble for a group of players. Remember, if the cart gets to the end and you haven’t thrown enough orbs the Public Event will just finish. You will know an orb counted because the cart will have a bit of an orange glow whenever it’s hit with one of the Resonant Charges. While you don’t always need to make this a Heroic Public Event, it’s a good way to help you reach the soft Power cap or earn Legendary weapons to dismantle.