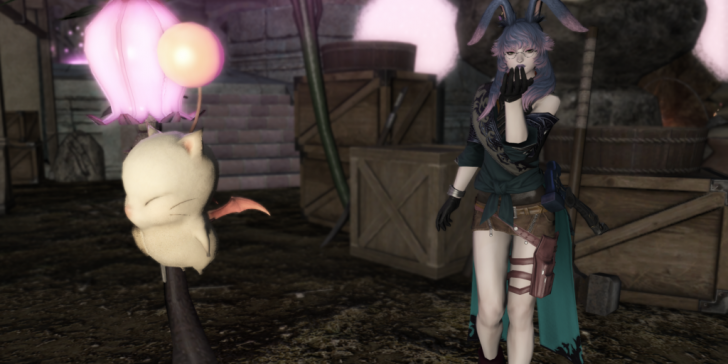 The path to unlock the FFXIV Moogle quests is long, winding, and not at all well-explained in-game. That’s because the whole process ignores a lot of the usual quality-of-life that goes with other Final Fantasy side quests. Unimportant missions that don’t unlock anything of particular note are usually marked with plain, gold quest icons. Meatier quests with major alternative content are then supposed to get blue icons with a friendly little plus sign on them. Not so with the Moogle Tribe quest line! No, you’ve got to guess and intuit which steps are important based on context clues. That or you can use an unlock guide.

Welcome to one such guide. This article will lay out every necessary quest for unlocking the semi-secret sect and its series of daily quests. That way you can access all the rewards that come with it — such as an exclusive mount and bonus XP for your appropriately leveled crafting classes. Assuming you have at least one crafting class up to Level 50, that is. The Moogle Tribe is ultimately a noncombat group that requires you to craft items and perform various other fetch quests to proceed with its storyline.

Before you start working on the side quests themselves, however, please note that finishing this questline requires progress through the Main Scenario Quest of FFXIV. Just like most side quests for that matter. You specifically need to finish the Level 56 mission “He Who Would Not Be Denied” during the Heavensward campaign. While certain steps in the Moogle Tribe unlock process are available at earlier levels, they’re pretty much worthless until you hit that part of the primary story. Also note that the following quests must be completed as a combat Job — just like the main campaign itself. Moogle Tribe quests may be for Disciples of the Hand, a.k.a. crafting classes, but these perquisite quests are not.

Once you’re finally ready it’s time to hit the Churning Mists region. You’re looking for an NPC named Mogleo who will be your point of contact for many of the quests going forward. You can find him and his quest marker at the following locations:

This ends one chapter of the Moogle Tribe unlock quests, but it doesn’t end there. Nor does the questline only extend to one NPC! Next we need to find the character Mogloo who will help introduce use to several more Moogles. You can find them and their quests at the following locations:

This ends the second chapter of the Moogle Tribe prerequisites, but only begins yet another. On the bright side, this is the last chain. On the negative side, it’s also the longest sequence of side quests and exposition so far. Not to mention you need to teleport to an entirely new location: Ishgard. We’re almost through, though! Here are the details:

And that’s that! Every single unlabeled unlock quest for the Moogle Tribe in FFXIV. There’s just one last step in the whole process, which is to complete the Level 50 Disciple of the Hand mission “Tricks and Stones” in the Churning Mists (X: 27.2, Y: 34.5). This is the first actual step in the Moogle quests. Hence why it requires a Level 50 crafting class — just like all the rest of the daily quests this new faction makes available.

From here on out you’ll be able to return to the Moogles at Barhrr Lehs, just east of the Zenith Aetheryte in the Churning Mists. The NPC “Mogek the Marvelous” will provide you with three randomly selected Tribe Quests to complete per day. Assuming you have enough Tribe Quest allowances left that day. Every player only gets an allotment of 12 total Tribe Quests to complete every 24 hours. You need to decide which faction you want to level up your Reputation level with carefully! Every new level of Reputation, including with the Moogles, will temporarily allow you to take on up to three more quests from that tribe that day. Though you still need to have that many total allowances.

You can check the Tribe Quest allowances from the Timers section on the Duty menu. Your allowances are near the bottom of the screen.

Hopefully all of this information was