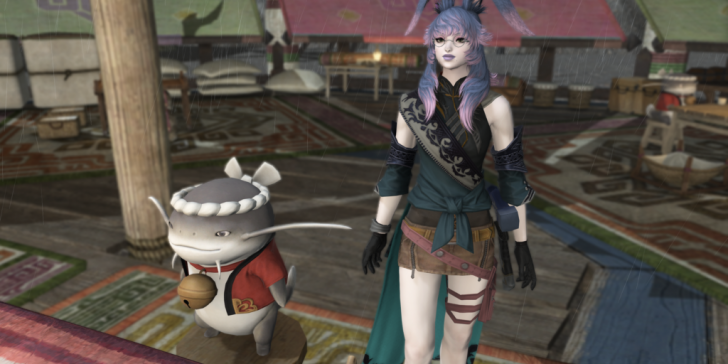 The Namazu Tribe unlock quests are mercifully easier in FFXIV than their cousins, the Moogles, from Heavensward. Though you still might not know where to start looking for the little fish friends. Well, we can handle that part at least. It’s still up to you meet the basic requirements. Namely: the Namazu are a noncombat faction in the world of Final Fantasy. Besides completing the prerequisite quests, you also need to have either a Disciple of the Hand or a Disciple of the Land at Level 60. That means Botanist, Miner, or a crafting class for the uninitiated! Once you have at least one of those classes covered, though, the freshly unlocked Namazu will help you level them up even further. Not to mention they can provide some nifty new items as well.

Before you can do anything, however, you need to finish the Level 64 Main Scenario Quest “All the Little Angels.” The relevant side quests that unlock the Namazu Tribe quests aren’t available in FFXIV until then. If you haven’t gotten that far through the Stormblood campaign, come back later! And if this is you coming back now, welcome! Let’s get to the details.

Once you’re good and ready it’s time to hit the Yanxia region of Othard. There are actually two questlines to complete in this region. You can do either one of them first, but the next quest in each chain won’t unlock until you complete the one before it. Not to mention the Namazu quests themselves won’t unlock until both are done.

Also note that these unlock quests are not for Disciples of the Hand and Land. You need to play a combat class (i.e. a tank, DPS, or healer) to complete them all. On the bright side they’re not too tough or complicated. There are also far fewer of them than the much-maligned Moogle quests that came before. And if you get lost, or take a break, know that the relevant unlock missions all have blue quest icons with a plus sign! This is typically an indicator in FFXIV visual language that completing these quests will unlock something new and/or valuable. In this case that means the eventual Namazu Tribe quests (which are for Disciples of the Hand and Land).

Now let’s start with the slightly longer of the two questlines:

And that’s all there is to that questline! The second chain of side missions is actually even shorter, too. Once again: you can complete either of these sequences first or second, but you need to complete them both if you want to unlock the Namazu down the line. Let’s take a look at this shorter set:

Ten quests. That’s it! Considering the Moogle Tribe unlocks clocked in at a whopping 19, the Namazu equivalent seems like a cakewalk. At this point we move on to the actual Namazu Tribe quests with the opener “Something Fishy This Way Comes” in the region of the Azim Steppe (X: 17.4, Y: 37.5). Once that’s out of the way, you unlock “One Size Fits All.” This, too, takes place in the Azim Steppe (X: 6.1, Y: 23.3) before finally unlocking the daily rotation of Namazu quests. You can check the Tribe Quest allowances from the Timers section on the Duty menu. Your allowances are near the bottom of the screen.

Hopefully all of this information helps you make some new friends that we’re absolutely sure don’t smell horrible or like seafood at all!